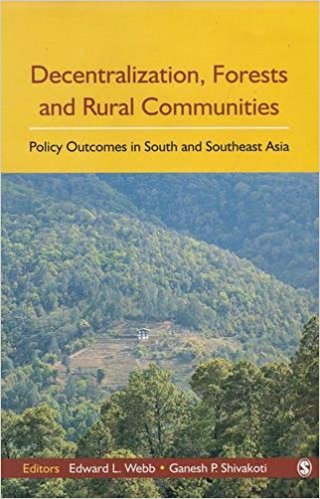 In the recent years forests are being increasingly seen closely linked to the livelihood of the rural people. Giving rights to poor villagers in forests is seen as essential to remove their poverty. The recent discussion in India on the Schedule Tribes (Recognition of Forest Rights) Bill 2005 is evidence of this. In this sense there has been a complete turn around in the meaning and purpose of forestry. In the nineteenth century a notion of centralized forestry emerged under which the state had to manage forests to ensure sustainable use and for profit. The rural communities were largely excluded from the state forests as their use of forest resources was seen as unsustainable. Over the years, however, the quality of state managed forests, in most of the developing countries, deteriorated. This led to a rethinking. Now decentralization, involving local communities in forest management, is seen as a solution to improve the condition of forests. Decentralization is being adopted by one country after another in a very similar way as once centralization was adopted. Decentralization of forests management is now a reality in a large number of countries.

What does this decentralization mean? What role do local communities have in this? What is the outcome of this new shift in forest management? These are some of the questions the book under review addresses.

Enormous literature has been produced in the recent years on the community management of forests but their focus, in general, has remained either on a small geographical area or a country. The greatest strength of this book is its wide coverage, providing a perspective on South and Southeast Asia. The book carries an excellent introduction by Edward Webb who argues that although Asia is developing rapidly and its poverty is declining, still a large population lives in villages. These villagers are dependent on forests for subsistence; hence decentralization of forest management acquires significance in this region. He explains the historical context of the emergence of decentralization.

Arun Agrawal and Elinor Ostrom analyse (chapter 2) the central concept of the book—decentralization. The objective of decentralization is generally said to be democratization and empowerment of local people, but as the authors tell us it is often also driven by the desire of the governments to overcome a ‘fiscal crunch’ and finding in it a ‘convenient mechanism to transfer cost to others’ (p. 45). The authors suggest that to understand the complex process of decentralization there is a need to analyse the role of actors (the central government, donors and local communities) and ‘changes in their rights and power’. Decentralization provides a local community with an opportunity to use, manage and own resources. The authors argue that while access to use resources is generally granted, there is reluctance on the part of government agencies in delegating full powers of decision making to village communities. And transfer of ownership of the resource is very rare.

While talking about decentralization is easy, ensuring it is very difficult. Agrawal and Ostrom underline some basic conditions for the success of community management of environmental resources. They argue that there should be effective institutions; important role for local actors ‘not just in the implementation but also in initiation and design of decentralization policies’ (p.63). Proper system of conflict resolution and proper incentives, and clearly defined rules with sufficient scope for punishment of offenders are also important. Above all they suggest that there is no blueprint for decentralization; there should always be space for local innovations and dynamism.

One of the conditions for the success of decentralization is the prevalence of a historical tradition of managing the common pool resources in the community. Essays on Bhutan and Indonesia are important in this context as they discuss indigenous institutions. Webb and Lam Dorji discuss various customary conservation practices prevalent in Bhutan and the sokshing is the most important among them. ‘Sokshings are the small plots of forest specially managed for the production of leaf litter and minor amounts of fuelwood’ (p. 78). They are traditionally owned by households, but there are community sokshings as well. After being neglected by the government for some time they are being revived again. Forests under sokshings are well managed and their condition, according to the authors, is better than government forests. In Indonesia as well the government of late (in 1991) has realized the significance of the traditional institution of the nagri and its role in forests conservation. These are being now given duty to enforce rules and report infractions to district officials. Their effective role has, according to Yonariza and Shivakoti, brought down illegal felling of trees.

Nepal is vigorously following the community forestry programms. To underline the significance of community forestry in Nepal there are three essays on it in the book. All three essays need to be read together as they complement each other. Ambika P. Gautam and Shivakoti compare three types of forests: community managed, semi-government and government forests. After 1978 the government decided to give land to individuals as well as community for management. The community formed Forest Users Groups to frame rules and regulate forests, and impose fines on infractions. The detailed discussion on working of the community forestry is missing. The authors have, however, noted that the condition of community forests has improved, but the semi-government forests are comparatively in a better condition. Mukunda Karmacharya et al in their essay compare the working of the community and the leasehold forestry. Under the leasehold forestry people living below the poverty line are given a plot of forestland. This it is hoped will alleviate poverty as well as ensure forest conservation. However, this has not proved to be so simple. Lease of a forest plot to a household implies that other members of the village community can no longer use it. This gives rise to conflicts which occasionally become violent. Ensuring conservation in such a situation becomes difficult. Contrary to this community forests are better conserved. But elites dominate their working and except in a few cases poor members of the community get a raw deal. Harini Nagendra et al compare the community forestry with the Buffer zone Management around the Royal Chitwan National Park in the terai of Nepal (chapter 8). The buffer zone forests have been handed over to User Group Committees of villagers to manage them within the broader guidelines issued by the government. The committees draw a lot of income from eco-tourism. Some of this money is spent on keeping more forest guards and having better fences around forests. Because of this the condition of forests under the buffer zone management is better than forests under community forestry. Very strangely there is no reference to human-wildlife conflicts in the buffer zone, a very prominent feature in the buffer zones of Indian national parks.

The essay by Rucha Ghate and Deepshikha Mehra on India is analytically sound and compares three sites of Joint Forest Management (JFM) in Maharashtra. At the site where conservation has indigenous origins the village community shows unity, infractions are severely punished leading to high degree of compliance, hence the results of conservation are good. This is not the case in the other two sites. In the village where conservation was initiated with the efforts of the forest department the village community is dependent for many crucial decisions on the forests officials, hence compliance to rules is poor. The situation is slightly better in the village where an NGO plays an important role in conservation efforts. But due to hesitation on the part of the NGO’s to get infractions punished severely, violation of rules is not uncommon. The authors conclude that indigenous efforts of villagers produce the best conservation results.

The case studies of Thailand and Vietnam are of different kinds. Some of the villages are of recent origin only and came into being as a result of resettling people who earlier practised shifting cultivation. Such people have been given forest land for subsistence as well as conservation. In Thailand the village community seems to have taken its own initiative for conservation. Traditionally people protected sacred forests, now they have divided forests into conservation and utilization forests. The conservation forests are protected to conserve water sources and have the state support. In utilization forests the village committee regulates resources extraction. The authors found the utilization forests in better condition compared to other forests. In Vietnam the state gives forestland (either barren land or natural forests) to individual as well as groups of households. While barren land is easily given, the state agencies do not show the same eagerness in allotting natural forests as that means sacrificing revenue. Barren land rarely gives returns, but only recently villagers have adopted fast growing trees which are giving them profit. But allotment of natural forests began only in 2003 hence Dung and Webb feel that it is too early to judge the results of community management of natural forests.

All these essays underline a fact that the state in South and Southeast Asia is involving village communities on a large scale in managing forests, but they also emphasize that this alone does not ensure successful conservation. Shivakoti and Ostrom explain the possibilities and constraints of these new initiatives in the concluding chapter. The book successfully highlights the experiences of Asian countries in community conservation. But community conservation in some of the countries covered in this book is only of recent origin, hence it would be too early to form an opinion about them. Finally, inspite of the lack of uniformity in the quality of essays the book is a significant contribution to the field of community conservation and will be useful to policy makers, NGOs, academics and environmentalists.

Dhirendra Dangwal is an Assistant Professor in the Department of History, H.P. University, Shimla. He is the author of a forthcoming book, Himalayan Degradation: Colonial Forestry and Environmental Change in India.