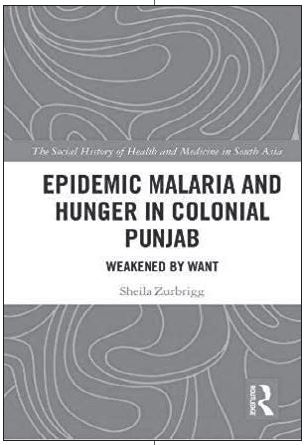 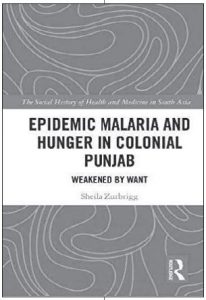 ‘The hungry rarely write history, and historians are rarely hungry.’
I have known the author of this astonishing book, Professor Sheila Zurbrigg, for a long time. I first read her book Rakku’s Story: Structures of Ill-health and Source of Change in the late seventies, when it came out through an alternative publisher. This book is not available because the publishing house apparently died. It is on the reading list of many courses at the Centre of Social Medicine and Community Health, in Jawaharlal Nehru University, New Delhi, where I taught for many years. We use xeroxes. I wish Zurbrigg had been to an exploitative mainstream press: we would still have had the book.
Rakku’s Story looks at the life of a Dalit agricultural labourer and her relationship with India’s health system. It was a devastating, data-based critique of India’s health care system and it opened my eyes to class, caste and gender and how these shape access to health. It also revealed, above all, how political economy explained the health system we actually have.

Among other factors, Rakku’s Story compelled me to move to my PhD work in JNU. Satisfying as it was working in community health settings, I wanted to make sense of my experiences: medical care played a very small, although important role, in health. Other factors predominated—access to food, employment, just wages and so on.

This review is a tribute to her work. Sheila Zurbrigg is a Canadian medical doctor, a public health worker, an inspiring leader against sanctions in Iraq and an amazing historian. Her work is based on historical records from the archives and libraries in India and the UK, an astounding reading of the literature, and the political chutzpah to relook at what these records say and how they can be interpreted. She has looked at epidemiological data, data on monsoons and rainfall, entomological data available, data on irrigation, and most importantly, on the price of food. Along the way, Zurbrigg describes the geographical features of Punjab, and her geological features, leading to water-logging. The amount of data she has looked at is mind-boggling. In addition to the qualitative data from historical sources, she has put the quantitative data she has obtained through elaborate statistical exercises. All this data is obtained district-wise for the years 1868 to 1908 when famines and deaths from epidemics ravaged the country. But it was ‘routine’ deaths from malaria that were the most significant.

This work is so important that it would have to lead to re-writing of the Economic History of India, from those Gods in Cambridge. But are they listening? For the demographic history in the influential Economic History of India is deeply influenced by Kingsley Davis’s reading of it. This is completely and utterly undermined by Zurbrigg in this masterful work.

Conventional wisdom on health history in India, led by that Cold Warrior Kingsley Davis in his influential work The Population of India and Pakistan—still, I suspect, taught as gospel in population studies, was as follows. The death rate declined in the West due to wide-ranging socio-economic change. Following a period, birth rates also declined due to socio-economic factors, despite absence of contraception, then banned. This was of course the demographic transition theory.

In India, on the other hand, Davis argued, death rates had declined due to medical intervention. Death-control technologies had brought down the death rates. Since the requisite socio-economic change had not occurred, a population explosion was on the horizon. This therefore called for bringing in population control technologies, for population growth would be an insurmountable impediment to socio-economic development. This is of course the conventional Neo-Malthusian understanding of the population question.

The death control technology Davis referred to was malaria control through quinine distribution, commencing in the nineteen twenties. The problem with this reading of demographic history is that Davis produced no data at all to substantiate his argument. Just his stature and the Anti-Communist zeitgeist of the nineteen fifties made his views accepted knowledge.

Zurbrigg observes that the decline in death rates in India is noted in a comparison of the Censuses of 1921 and 1931. This is when population begins to grow in the subcontinent. We might note, however, with surprise that population growth had been identified in the very first Census of 1881, as an explanation for poverty in India, fifty years before population actually grew.

The major disease contributing to the appalling death rates, was fever i.e., malaria.
In this powerful volume, Zurbrigg goes through the 1911inquiry report, Malaria in the Punjab by SR Christophers, leading colonial malaria researcher, and his remarkable observations of malarial epidemics in Punjab, related to price rise of food, what he called ‘scarcity’. Analysing this in detail, Zurbrigg finds that this important factor—adequacy of food—has disappeared from epidemiological studies. This was partly due to germ-centric explanations of disease, ignoring socio-economic factors. It was also due to medical hubris: the more we understood diseases, we felt we must look for cures in medical technology. Thus hunger as a major determinant of infective disease lethality disappeared from the medical gaze.

Zurbrigg’s monumental work shows how literally fatal these explanations were. Equally fatal were laissez faire economic policies, as the colonial government refused to intervene when famine was threatened or arrived. Then, as now, ‘free-trade’ killed the vulnerable.
Inspired by Christopher’s work, over a long period of time, Sheila Zurbrigg traces data on rainfall, on entomology, on malarial disease rates and death rates. The findings are truly dazzling: ‘The close relationship of autumn fever (malaria) mortality to monsoon rainfall and prevailing wheat price observed graphically for the 1868-1908 period is borne out in aggregate regression analysis’ (p.140). For during this period, the construction of railways and export of wheat from Punjab, contributed to rising prices and to malaria mortality. Zurbrigg notes that ‘grain exports would decline in 1893 and prices quickly fell. So, too, did fever and overall death rates’ (p. 174).

Zurbrigg finds no evidence that any anti-malarial measure, whether of drainage and anti-larval measures, or cure through quinine administration, had any role to play in the decline of death rates in general and malarial death rates in particular. ‘Malaria merely reaped a harvest prepared for it by the famine’ (p. 402).
Zurbrigg argues that the growing opposition to colonial rule from the turn of the 20th century made the shift to famine prevention a political imperative for the British Raj, rather than simply relief of established famine. Marked decline in malaria mortality after 1920 followed in turn. In conclusion, Zurbrigg notes ‘the post-1920 decline in malaria lethality was part of a broader demographic trend in the subcontinent, evident for other major infectious diseases as well’ (p. 406), noting that the lethality of cholera and small-pox also declined during this period, despite no specific medical intervention.

Weakened by Want is not just a major work of history, rewriting conventional health and demographic history, it is also revolutionary in helping us understand disease causation, bringing back the forgotten role of hunger in history, strengthening a McKeownite analysis of epidemiological history. As Thomas McKeown revealed for England and Wales, the nineteenth century decline of death rates had little to do with either curative medicine or even preventive health: broader socio-economic change, better living condition, rise in real wages and freedom from hunger were the underlying causes (McKeown 1976).
Now, how does this apply to current health policy? It clearly shows us how hunger is important even now in India and that failing to address this explains the continuing high relative infant and child mortality rates. It also shows us that explanations based on individual and behavioural factors for health is completely misplaced. We also have an epidemic of diabetes and hypertension now in India. These are only partially life-style diseases, among the upper middle class and rich. Among the poor, it is intrauterine nutritional deprivation, the so-called Barker’s hypothesis that causes these morbidities and mortalities. Attempts at simply curing these diseases, important though this be, will not do to prevent them.