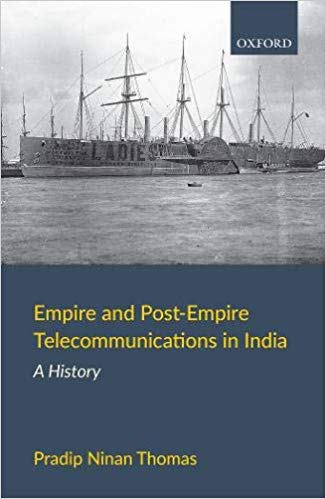 ‘We are off’ was the cryptic concluding line of a telegram two young British Telegraph officers managed to send out from Delhi to Ambala on 11th May, 1857, informing British military authorities there that the mutiny had spread to Delhi. Thus the Revolt of 1857 was the site for the dramatic intervention of the new technology, namely telegraph in disseminating information in the subcontinent. We must though guard against overstating the role of telegraph as a source for the flow of information in 1857 since both Deepkanta Lahiri Choudhury and the book we are discussing here show that telegraph lines during 1857 were mostly redundant as the mutineers extensively destroyed telegraphic poles and lines. There were a host of technical issues too.

Pradeep Ninan Thomas’s book is a fascinating read. The history of telecommunications in the subcontinent began with the introduction of the first telegraph line from Calcutta to Khejuri in 1853. While the story has been superbly documented by Deepkanta Lahiri Choudhury, Thomas adds certain extra elements to the complex and fascinating story of the motives which lay behind the setting up of an intricate telegraphic network, though he neglects to dwell on the formidable technological, topographical and strategic challenges the subcontinent specifically posed to the setting up of a telegraphic network.