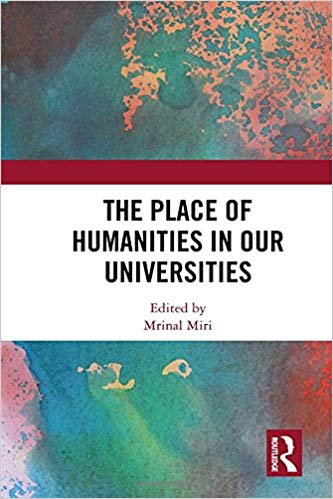 The painful transition of universities from merely an examining body to a teaching institution in history could be observed in terms of the balancing acts between diverse academic demands including research. These acts can be contextualized within the systemic realities of new public management. As a result, the optimistic vision of perceiving the universities thoroughly in terms of original research is seemingly impractical in the heightened market capitalism. An obvious outcome out of these balancing acts can be seen in terms of the inability to produce new knowledge in humanities where even understanding about the established old truths are mixed in nature.

In this backdrop, the volume under review with its symbolic manuscript-cover describes both intrinsic as well as constitutive elements of various binaries. In contrast to the radical definition where universities are often visualized as a ‘space for sustained critical reflection’, the authors of this edited volume examine the ethical climate of contemporary times. The steady diminution of the place being accorded to the humanities instigated them to analyse the implications of the absence of incisive deliberations in Indian higher education. This shall be seen in the wider context where universities have been turning themselves into training schools for the modern economies as they are marked by the enormous public influence of the corporates.

Humanities education in India carried with it a sense of vacuum, a kind of disciplinary lack, they ‘had already been undermined by the traumatic break with pre-colonial knowledge systems instituted by the colonial university itself’ (Chaudhuri p. 16-17). An instance can be observed in philosophy where ‘…ever since the subject has been turned into a profession in universities, the careerism that this generated had the effect of making philosophy stand apart as a site of jobs with its own self-standing topics done in independence from the knowledge pursued and provided in other departments in the university’ (Bilgrami p. 10). In this backdrop, Bhargava’s arguments to keep the humanities as a core element of the social sciences shall be considered in terms of Chaudhuri’s definition. According to her, humanity ‘is a condition of profound dependence on other constituents of our world, so that we are not human in and for ourselves, but by and for others.’ Thus, the place of the humanities can only be addressed by looking again at what we mean by human and how we understand this term in relation to other constituents—living and non-living—of our universe (pp. 22-23).