Between Hope And Despair 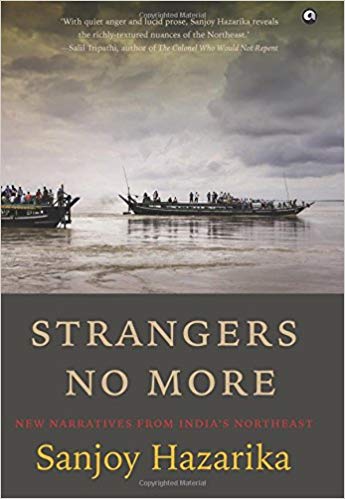 A journey through the eight States of North East India, the present book is a sequel to Sanjoy Hazarika’s earlier published and much acclaimed title Strangers of the Mist: Tales of War and Peace from India’s Northeast. Hazarika states that Strangers No More is a deeply personal book through which he intends to understand and express his concern on topical issues pertaining to politics, policy, law and disorder, violence and painful reconciliation, conservation, oppression, acts of stereotyping, thereby capturing hope and despair in the process.

Media representation of the North East has perpetuated an image that has continued since the colonial period and into the postcolonial phase. The author addresses this by showcasing the lesser known and untold stories from the field, forests and villages. He has been involved in peace building initiatives in the region for a long time. The book is informative and offers details to which people in the field of academics and journalism are often not privy to. The chapters of the book do not necessarily follow a topic or issue in terms of a chronology.

In the introductory chapter titled ‘Disputed Border: Divided Peoples’, Hazarika sets the tone by informing us about the complex historical and political developments in the region. The first and second chapters of the book focus on the Armed Forces Special Powers Act (AFSPA), the horrifying rape and killing of Manorama Devi and struggle conducted by Irom Sharmila against AFSPA. The issue of AFSPA has been addressed in other parts of the book as well. The author provides an insider account of the committee report which was set up on AFSPA. He laments the indifference of the state and its lack of will in implementing the recommendations and suggestions of the report.