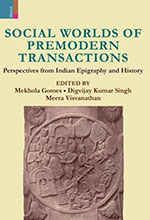 Fernand Braudel’s call for studying the interactions among interrelated ‘ensembles’ (politics, social hierarchies, economy and culture) in a complex society (Afterthoughts on Material Civilization and Capitalism, 1977, p. 8) finds resonance in this thought-provoking collection of essays on pre-modern South Asia. The seven contributors, including the three editors (who are authors too), demonstrate an exemplary maturity in handling pre-modern testimonies. In the current preferences for cultural studies in South Asian history, often privileging literary texts, synchronic treatments of the past(s) are common. In contrast, this book gives centrality to inscriptions (from the late centuries BCE to the 16th century CE), analysed diachronically with spatial specificities.  All chapters relate to written words, negating the primacy to memorialized orality in prevailing historiography (e.g., the orthodox Sruti-Smriti and Puranic traditions). Here, written communications are not secondary to textual images in perceiving the socio-cultural multiplicity of South Asia beyond dynastic shifts. While epigraphic records in conventional historiography are the mainstay of dynastic narratives and   chronological framework, the more significant point is that inscriptions are descriptive sources, distinct from the normative (mainly, the Brahmanical texts). Far more secure than literary texts in temporal and locational moorings, inscriptions witnessed changes in pre-modern socio-economic, political and cultural situations. Often slow and nearly imperceptible, these changes firmly reject the notion of millennial immutability, by discerning the process of ‘continuity through change’, pioneered by the late lamented BD Chattopadhyaya.

Two distinctive features of the essays need underlining. First, the essays, except the fourth one on the Tibetan networks with the Mahabodhi (Bodhgaya) Temple, deal with the Deccan and the far South India—thus perceiving pre-modern South Asia without an unnecessary and illogical emphasis on North India, especially the Ganga Valley. Second, the last four essays focus on the socio-economic and cultural formations in the coasts of the Deccan and the deep South, enabling the sighting of transactions—commercial and socio-cultural—in the littorals, embedded to the Indian Ocean. The importance of the written words for recovering pre-modern South Asia’s maritime profiles comes out here.