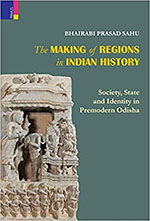 The very title of Bhairabi Prasad Sahu’s book The Making of Regions in Indian History: Society, State and Identity in Premodern Odisha suggests that he is looking for processes that went into the making of regions and the associated individualities. The book reminds this reviewer of a volume, Centres Out There? Facets of Subregional Identities in Orissa, edited by Hermann Kulke and Georg Berkemer, published in 2011 where attention was drawn to look beyond the ‘Golden Triangle’ of Bhubaneswar, Puri and Konarak and focus on their hinterland and periphery. Sahu’s essay in that volume was ‘Profiling Dakshina Koshala: An Early Historical Subregion?’ He argued that in the early historical period Dakshina Koshala was an evolving subregion which had its personality defined in the later period. This foregrounds the fact that regions or subregions evolved over a period of time. BD Chattopadhyaya in the same volume while writing on space, history and cultural process, had opined that methodologically one has to look ‘at the process and chronology of the formation of cultural zones and of networks of interaction, and further, to examine whether historically larger spatial formations could and did emerge over time.’

Thus, Chattopadhyaya and Sahu were questioning the general tendency to look at a region as a permanently homogenous entity, not accommodating variations and mutations. Hence, there was a revisionist turn in the treatment of histories of a region. Sahu articulated that it was a shift from regional histories to histories of a region. One cannot forget that regions form one stage in the hierarchical continuum of territorial spaces like local, subregional and regional. Thus, any study on region is likely to be linked with subregion and local. Long back, in 1970, Barrie M Morrison underscored the distinctiveness of the different subregions of neighbouring Bengal, taking the copper-plate charters as the primary source. He basically looked at the political centres and so there is further scope to study the cultural ingredients of these subregions. Sahu’s collection of essays largely addresses most of the ingredients required for the formation of a region and the macro processes of formation of regions are dished out through micro studies.