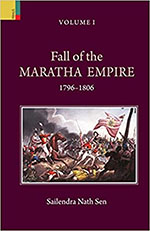 The history of Maratha-ruled States in the last quarter of the eighteenth century is rather complicated, to some extent because it is the intertwined history (apart from the Pune court) of four major States. These four were the territories ruled by the Shinde, Holkar, Bhonsle and Gaikwad dynasties, all of which acknowledged the Peshwa as their nominal overlord. Of these, the Scindia/Shinde, Holkar and Gaikwad States remained historically significant till the end of colonial rule. The Gaikwads with their capital at Baroda, were part of the exclusive club of three States which in colonial India had the privilege of twenty-one-gun salutes; later, in 1917, the Scindia-ruled Gwalior State joined the club (and at the end of British rule only five States had this status). The Bhonsle State of Nagpur (or Berar) ceased to exist in 1853 when it was annexed by the East India Company (EIC). The Pune court became defunct in 1818, when the suzerain of the Maratha chiefs—Baji Rao II—lost his territories and his status as Peshwa at the end of the Third Anglo-Maratha War and was exiled to Bithur. In his massive two-volume study, Sailendra Nath Sen provides a detailed account of Maratha affairs during the years that Baji Rao II was Peshwa—1796 to 1818.

A large part of this history is fairly well known. PC Gupta’s Baji Rao II and the East India Company, 1796-1818 (1939) dealt with the same period. Gupta’s account focused mainly on political aspects, diplomacy, and court intrigues. Sen’s volumes too have a similar focus, with a lot of space devoted to military campaigns. Of course, Sen takes into account writings published in the latter half of the twentieth century on the subject. What makes this work particularly useful is the incredible amount of detail it contains and the attention it pays to all the major Maratha polities, ‘to show that each power had its share of blame on the eventual fall of the Maratha Empire’ (Vol. II, p. xvi). It needs to be underlined that after the battle of Panipat (1761),