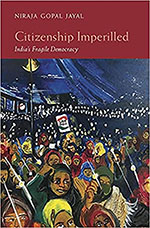 Citizenship Imperilled: India’s Fragile Democracy by Professor Niraja Gopal Jayal unravels the complex and contested layers of the theory and practice of citizenship in independent India. The underlying query of the book is whether the constitutional ethic of Indian citizenship as an inclusive and egalitarian civic-national norm has been imperilled and ‘irretrievably undermined’ in more recent times. In response to this question, the book argues that the expansion or erosion of Indian democracy is contingent upon its citizenry. In this collection of essays, which were previously published between 2012 and 2019, Professor Jayal navigates through the normative, the constitutional, the civilizational, the legal, the performative, the imaginative, and the practical hues and nuances of citizenship in India. The book has seven chapters plus an introduction and a conclusion. These chapters are clustered into three sections: the first is titled ‘Laws’, the second ‘Contestations’, and the third ‘Antinomies’.

The first section of the book has two essays that are titled ‘From Birthright to Faith-Based Citizenship’ and ‘Laws, Politics, and the Architecture of Citizenship’. This section of the book draws attention to the cases that were taken to court over domicile, migration, citizenship, and the passport. These essays examine the founding of the constitutional principle of citizenship based on civic nationalism, the ensuing Citizenship Act of 1955, the case laws, and their amendments. The two essays contend that although the Constituent Assembly tried to counter the divisiveness wrought by the Partition and emphasized the principle of jus soli (citizenship due to birth in a territory), as ‘a modern, civilized, enlightened and democratic principle’, the legacy of Partition continues to haunt the legislative and judicial evolution of citizenship in India.

Jayal writes that the repercussions of Partition in the form of the creation and migration of refugees into India led to contentions over the jus soli principle of citizenship. She then illustrates the shift towards the principle of jus sanguinis (citizenship on the grounds of race, ethnicity, descent). The shift was substantially due to the Assam Movement of the late 1970s and 1980s.