Beyond Imposed Labels of Contemporary Discourse 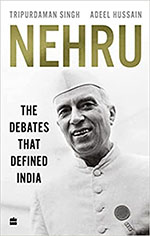 Books on Jawaharlal Nehru are seldom rare—Nehru, indisputably, is a perennial favourite of publishers and authors, as can be seen in the countless books on him that relentlessly keep pouring out, year after year. In the recent past, Nehru’s views, his persona and his policies, have become a matter of intense debate, and shall I say controversy, especially with the present ruling dispensation propping him up as an ideological counterfoil to polish its grand Hindutva narrative. The ghost of Nehru still looms large over the contemporary political landscape of India, and not because the Congress invokes Nehru with any penchant for bolstering its ideology. Nehru lives on—although in infamy—because those at the helm of the RSS-BJP combine won’t let him die; they would rather keep him on the ventilator—forgive the analogy inspired as it is by our age of ubiquitous pandemics—so that he can continue to be a punching bag for the nationalist aficionados of the day.

In February this year, Nehru again rose to prominence in the collective memory of the nation with Prime Minister Modi vociferously attacking him in a speech in Parliament, in the midst of the recently concluded assembly elections which the ruling party won decisively. Nehru is mostly left undefended as the Congress doesn’t seem to have the political wherewithal to espouse his secular ideology in an increasingly Hinduized polity. However, he still serves a purpose for the ruling party which can use him as a milking cow in electoral battles. Needless to say, the concerted smear campaign by the Hindutva brigade in the last decade has vitiated public consciousness to the point where in the popular imagination Nehru has now morphed into an arch-villain for everything that is wrong in India. Tripurdaman Singh and Adeel Hussain have collaborated, at an opportune time, to put into our hands Nehru: The Debates that Defined India. One can begin by stating the obvious: books on Nehru, any book on Nehru, in the context of our times, will have the dubious distinction of transcending the academic and protruding on to the political contestations of the day; in other words, the politics of the book shall also be inescapably called into question and judged, along with its scholarly merit.