Embedded Markers in an Evolving Market 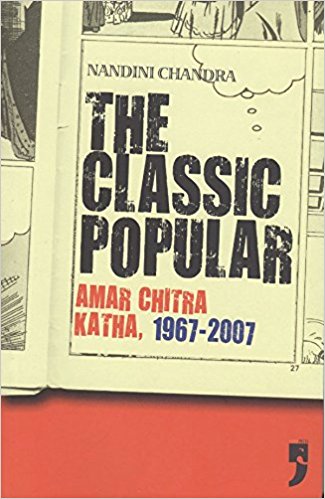 The title of Chandra’s book seems to assume no more credit than that of reviewing the production, distribution and consumption of Amar Chitra Katha during a period of 40 years, but it does much more than that. Secondary work on popular culture has often been discredited for merely encompassing such surveys because it is untheorized and eclectic, and supposedly unable to make connections between the literary text and the social context. Since there is hardly any cataloguing or database of writing for children in India, even a survey would be very useful.

The book, to begin with, is a foray into the market dynamics of a very popular comic book series within a cluster of middle class readers across a pan-Indian spectrum. It is a crucial entry point into the study of a significant subdivision within the culture industry within a specific period and milieu that incorporates publishers, writers, illustrators and readers.

In India, the pre-globalization ethos apropos the ostensibly sanitized world of books was inimical to and distrustful of issues about their marketability. Yet even ‘serious’ literature’ that is considered ‘art’ and not ‘commodity’ is not so impervious to markets, consumption patterns and economic profit as to warrant assessment only in terms of what Pierre Bordieu calls ‘symbolic’ profit. Chandra tries to reconfigure the available facts and figures about the writing, showcasing and circulation of ACKs, tracing the transition it has undergone from the residual nationalist euphoria and the state-endorsed socialist culture of the Nehruvian era to the post-liberalized economy since the late eighties. In recuperating significant trends and trajectories, however, she is silent on the impact of the repressive publishing policies of the Emergency, if any, on ACKs, although how the ideological propaganda of its right wing backlash affects its market occupies the corpus of her thesis. Education, and thereby reading matter for children, says Krishna Kumar, is vulnerable to political manouevres and games as well as the economic strategies of specific political climates. ACK, therefore, did not remain insulated against state institutions, political parties, the educational apparatus and varying financial and industrial interests.