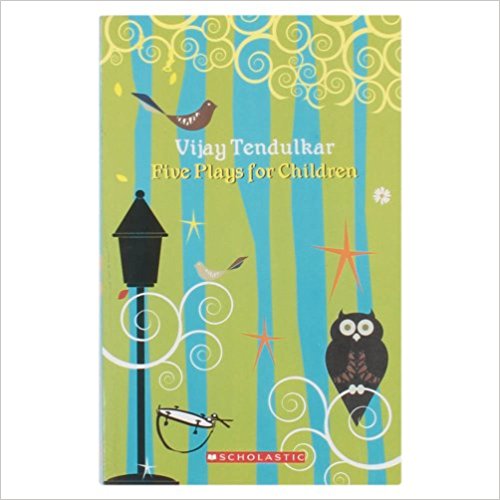 ‘Give me a piece of paper, any paper and a pen and I shall write as naturally as a bird flies or a fish swims.’ These passionate words were uttered by Vijay Tendulkar, one of the greatest Marathi playwrights, who earned equal accolades in India and abroad. He is famous for his adult plays but he has also written six plays for children. These plays were written at the request of Sulabha Despande who worked with him as an activist. She wanted him to write a few plays for her school children so that they could take part in the competitions.

In the first play ‘Missing A Father’, the playwright has taken a few fixtures from our surroundings and made them talk like human beings. The Pole, the Letterbox, the Tree and the dancing girl in the poster—they all come alive and discuss their personal problems. They may be inanimate objects but they react just like human beings with feelings.

When they see the kidnapper and the little girl, all of them are concerned about her. In spite of not being a part of the social set up, they want to rescue the child from the evil intentions of the kidnapper. They plan to create a situation by which the girl can be found by the police or a passerby. This play also highlights the insecurity of the girl child in our society, especially those from a lower strata and the illiterate group. The girl does not know the address of her home. The play ends with food for thought for the audience.

But the play tends to be too long. Generally children’s attention span is short and the interest cannot be sustained for a long period of time.

‘Bobby’s story’ is the story of all those children whose parents are both working and the child is left all alone for long hours. The playwright has successfully dealt with the trauma of the lonely child. Bobby also suffers from the gender bias of our society. She is aware of the fact that her parents wanted a boy and she happens to be a girl. She is made to dress up like a boy to satisfy her parents.

While waiting for her parents to return from work she tries to keep herself occupied and allows her imagination to take flight. The images which are in her mind take real shapes and she is able to interact with them. The historical characters of Birbal, Akbar and Shivaji come to visit her. She likes to talk to them yet she is aware that they are not real. It is only her imagination. Those whom she detests in real life, come alive in front of her in the shape of Rakshas. In the dialogues of Micky Mouse there is a satire on food adulteration in ration shops. Bobby’s emotions are well displayed. One moment she is dancing with the moon and the stars but suddenly she remembers her mother and throws away things in anger. The message of the play has been clearly brought out in Birbal’s dialogue: ‘Ever since mothers have started going to work, this has been the state of small children like Bobby.’ But the play ends on a happy note. The moment her parents come, Bobby feels relieved and imagines all the nice things that her parents are going to do to please her and she is happy. It shows that children are easily pleased with a little affection.

‘The Play of a Nosey Parker’ is a humorous play. It also highlights the luxurious style of living among royal families. The feet of the little prince are scorched because of the heat of the burning sun and he continues to bawl. The king and the queen are perturbed and want the ministers to find a solution so that the prince does not suffer can and go out to play. Many suggestions come forth like putting a canopy across the sky so that the rays of the sun do not fall on the ground and heat it up. Another idea is to sprinkle the sky with water so that it remains cool. The prime minister comes up with yet another idea of firing guns at the sun so that it is destroyed. But all these ideas fail to achieve their purpose and the sun remains hot. In the end it is Shidba the cobbler who comes to their rescue by protecting the tiny feet of the prince with an old pair of slippers. Every one calls him the nosey parker but he is the only sensible character, who gives them a solution for their problem. This play is very interesting for children. The comic characters of the dumb king, the lazy Prime Minister, the jester and the soldiers keep the humour alive throughout the play.

In the play titled ‘The King and Queen Want Sweat’ Vijay Tendulkar has highlighted the importance of hard work. The king and queen want to sweat but due to their sedentary lifestyle they cannot perspire. ‘Sweat only drips when you toil and perspire’.The play carries a message that even if one has a luxurious life, it is not necessary that he or she has peace of mind. The king and the queen are eating the tastiest food and wearing the most expensive clothes but they do not have a son. So the priest gives them a potion, which the queen has to drink in order to have a son. But it has to be mixed with human sweat. That is why they want sweat. They try to find sweat from many people but no one amongst the king’s subject can give them sweat because they are not used to hard work. The businessman can give them gold, diamond and lots of money but no sweat, similarly the farmer is ready to sell his bull, wife and parents but not ready to work in the field. The king realizes that he is responsible for everything. Nobody works in his kingdom because their king is lazy and has never done any work in life. He is ready to hang himself but at the request of his people he decides to work hard so that his subjects follow his example. It is a well written play but is too long to hold the attention of children. The entire play has been written with a specific rhythm in mind and therefore many of the dialogues are in verse.

The last play ‘The Wedding of the Village Headman’s daughter’ stresses the point that with the advent of new and better methods of entertainment, the traditional instruments like kettle drum and the village drummers are slowly eliminated from important ceremonies like weddings. The village headman is rich and is getting a band from the nearby town for the wedding of his daughter. Dhondu the village drummer is unhappy about it. All these years he has been playing for all the weddings but now with the band coming to the village he is no longer in demand. Bajya a cripple with a bad stammer comes to the rescue of Dhondu. He frightens the band members and makes sure that Dhondu the village Drummer is invited by the village headman to lead the wedding procession of his daughter.

All these plays contain the essential elements necessary for children’s plays. The language of the plays is simple and straightforward. Songs poems and dances have added variety in the plays which are full of action. Although most of them deal with social issues, there is no lecturing on values or forced judgments. Vijay Tendulkar stressed movement and body language rather than the spoken language. The characters are real and children can identify with them. After reading the play the viewer and the reader are left with many questions. Thus these plays are thought provoking.

Ajay Joshi has done a great job in translating these plays from Marathi into English. At places he had to compromise on names which have special meanings in its original version but he manages to capture the spirit and the message of the plays.