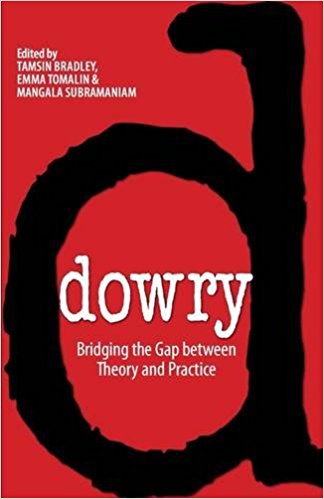 The book is the outcome of a network called the Dowry Project, established in 1995 at an International Conference on Dowry and Bride Burning at Harvard, with the aim of encouraging , sharing and disseminating research in the areas of dowry, bride burning and son preference in South Asia and its diaspora.

The issue of dowry became the focus of campigns by the Indian women’s movement in the 1970’s and 1980’s when incidents of harassment of women and her parents often including death of the bride by burning her took place. The book examines both theoretical explanations as well as field data and activists’ interventions. It is a welcome addition to our understanding of its original import as premortem inheritance for women at the time of marriage where women did not inherit land and were entitled only to moveable goods like jewelry, clothes and other assets.

It orginally constituted ‘stree dhan’ or bride’s wealth.The transformation of this into the modern phenomenon of ‘dowry’ with its implications of extraction by grooms’ parents is seen as the result of several social and economic changes. The earlier ‘varadakshina’ , that is the gift to the groom at the time of marriage was just a token amount. Sociologists trace its present day avatar to the mid- and late twentieth century. The decline of landed property in joint families, the rise of independent incomes for men as a result of expansion of education and jobs during colonial period, gradual erosion of the value of women’s labour, rise of ‘domesticity’ in the upper castes and withdrawal of women fom family labour are the combination of circumstances that eventually led to increased valorization of men and a corresponding devalorization of women. A major reason is the compulsion for marriage for women and caste related marriage. As Uma Chakravrty has cogently argued, gender and caste are so intermeshed that caste cannot exist without marriages within caste/sub caste. It is often the result of seeking promotion to a higher caste or better economic staus by marrying ‘upwards’ But why and how did it spread to other castes and how did it get associated with violence against women? Authors like Uma Narayan reject the western feminist view that it is cultue specific to South Asia.

Anthropologists recount the existence of dowry from times immemorial—rather more correctly exchange of gifts in the form of ‘bride price’ or other gifts to the groom. Even in India bride price was generally the norm among the lower castes. The groom’s family was buying the labour of the bride from the bride’s family. However, the canker of dowry has insidiously permeated among all castes. I recall Indira Rajaraman argued some years ago in an article in the Economic and Politcal Weekly that as the marital household has to ‘maintain’ the non working bride, it needs compensation. This is an oversimplification. For if it is true it should not prevail among the ‘working class’ or among educated women who earn. Fundamentally this approach to seek explanations in outside forces, ignores the role of gender assymetry in terms of power and prestige under patriarchy. The volume very ably foregrounds both through theoretical anlysis and field data that dowry is a structural mnaifestation of inequalities in society and the focus only on violence related to it is misplaced. The women’s movement campaigned for legal remedies and the Dowry Prohibition Act was passed in 1961.Its amendment in 1984 became necessary as this Act proved to be a non-starter. To date convictions under this Act are negligible. In most cases law precedes social customs and the expectation that the law would usher in reforms is optimistic. All in all the introduction is so well written it is self-sufficent in itself.

There are sevaral contributors. Santa Rozario of Bangladesh demonstrates how despite all the positve changes for women such as more paid employment in garment factories, emergence of NGOs, micro fianance, greater presence of women in public places, high levels of school attendance, improvement in health and access to family planning, violence aginst women is pervasive. She sees this as the disjuncture between culture and economy. The critical factors she identifies as i) surplus of women over men, ii) modernisation and iii) the stranglehold of ideology that extols notions of shame and honour with respect to women. Micro credit has enabled women to send children to schools or build houses, or run enterprises but has not built female solidarity. Men use women to obtain credit. As a result dowry has become a source of capital for groom and his family.

Kate Jehan has sought to get men’s attitudes to dowry. For the first time in the literature on dowry here we get to hear men’s voices. The modern dowry phenomenon cuts across geographicl barriers, caste division and rural urban divides. Men view dowry in these interviews in Tamil Nadu as due to them as ‘providers’ for the family. They do not think of it as women’s pre mortem inheritance. Though there are dissenting voices where some think of it as a modern aberration, most men are reluctant to give up what they consider as their privilege. Mnay years ago I was invited by the IAS training school to give a lecture on gender.The response was hostile; most felt that their IAS status deserved dowry from the bride’s parents. Whether religion has a role is investigated by Tamsen Bradley. Religion and gender according to her are not parallel phenomena but are mutually embedded. To quote her: ‘Religion and culture weave together, help create and support a gendered chain that begins with a patriarchal element and ends in violence against women. Hinduism has this cluster—son preference, heterosexual marriage and wifely submision as role model for women. Religion in so far as it shapes world views regarding what it is to be human and governs matters such as kinship, life cycle, environmental beliefs, ideals of human society, dignity and well being. The author disagrees with the idea of gender determinism and holds that gender on its own cannot explain pervasiveness of dowry.

Even though texts do have an impact, real social, life harbours many pluralities. If Sita is a model of the devout wife, Kali represents at the other extreme—an autonomous, powerful symbol of femininity.

Sonia Dalmia and Pareena G. Lawrence compare experiences of dowry in North and South India. An elborately designed research with many categories like education of bride and groom, wealth status of bride and groom’s families, age of groom and bride, their educational level and so on. They find no evidence that dowry is a premortem inheritance. There has been more escalation of dowry in North India than in the South where it is more or less constant.
Rajni Palriwla, a social anthropologist and an active member of the All India Democratic Women’s Association, feels the emphasis on violence obscures structural factors. She pleads for the need to readdress and redirect our strategies and suggets three conceptual themes: a) entanglement of gender oppression and other social oppression: b) dialectic between gender relations and non gender social, economic, politcal processes and c) relationship between law and society. Liberalization of the economy , identity politics, increased social mobility and availability of liquid wealth are factors that have triggered the inflation of dowry. These multi-structural links of dowry can be broken if men can exercise initiative for its abolition. Since when have the priviliged voluntarily given up their priviliges?

Delineating feminist dicourses, Srimati Basu locates dowry in new consumption and labour practices and rejects the western feminist orientalists who associate dowry with abject patriarchal oppression and women as trafficked victims. She contends that problems of dowry are fundamentally related to the politcal economy of compulsory heterosexual marrriage, gendered property entitlement and permissible violence. Impoverishment consequent on diminishing size of landholdings, which do not yield adequate returns coupled with devaluation of female labour and denial of land to females are contingent factors.Basu briefly examines the trajectory of laws—1961, 1984 relating to dowry and the 2005 Domestic Violence Act. Women’s movement initiated the setting up of family courts and new research on family laws, family violence, the conduct of courts, police and mediating organizations have definitely created space for women though the link between gender and power still remains unbroken. We have to address head on patriarchal control and transmission of resources.

At the global level the issue has been framed primarily in terms of violence against women though the United Nation’s Economic and Social Council makes passing reference to cultural practices in the family as the culprit. The Convention Against All forms of Discrimination Against Women( CEDAW) has no teeth. In contrast, recently, Indian women’s movement has lobbied for a law and has projected dowry itself as a symbol of control of women and not just its manifestation in violence.Altogether a rich fare and gives scope for further stimulating dialogue and working out strategies more effective than in the past.