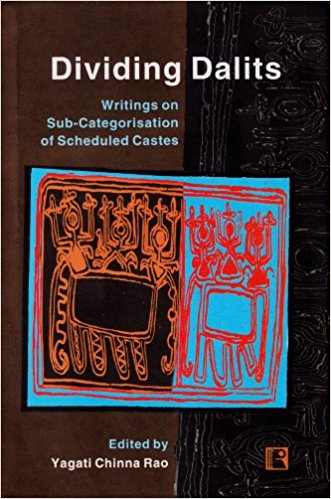 This book attempts to look at the difficult problem of analysing dalits in terms of their differences which is a historical problem as old as time. The question is how they are named, by themselves and others. By defining this as a problem of the evaluation of status, all the authors communicate that history sanctions names in terms of qualitative tendencies. Communities are known for themselves in terms of work and livelihood, but when status is conjoined, then ‘new problems’ arise, which may have political overtones. Max Weber’s essay ‘Caste, Status, Party’ from his book Economy and Society has been the vein that links the essays. The battle between Madigas and Malas in Andhra Pradesh, preoccupy many of the writers in this collection.

The introduction by Yagati Chinna Rao is useful in terms of delineating difference as political strategy, but the real ethnographic contribution lies in thick description as Geertz defined it, which by-passes statistics with the idiom that God lies in the details.

It is the same for the work of any craftsperson, theoretical, artisanal or manual. The statistics when read with the expertise these social scientists have, we come to know the many different names that dalits carry as a baggage of wants, needs and the concomitant status that these bring with them. Carriers of offal, keepers of the land, labourers to others, all of these are conveyed in their relation to the Gods and to other humans. It is a difficult task to highlight why religion or ideologies may keep them static. Thus dividing dalits creates a new problem in terms of their self perception today, when unitary principles are seen to be necessary for action which will foreground the possibility of equality and constitutional rights.

One of the arguments made against liberalization by Gundimeda Sambiah in this volume is that caste Hindus benefit from new economic opportunities, dalits may not. Therefore traditional tasks remain the bulk of lower caste occupations, and as agricultural labourers they do not benefit from industrialization, which undercuts farming. In a conference on the Gandhian economist Cornelius Kumarappa (organized on 30th January 2010 in Delhi) by the Tamil newspaper Dinamani and the New Indian Express from Chennai, Professor T. Karunakaran of the Mahatma Gandhi Institute for Rural Industrialisation, (MGIRI) Wardha said that the real answer to India’s poverty lay in rural economic zones (REZ) and their development. The dialogue between engineers and rural communities gives us an insight into how the question of 80 percent of our people who contribute to industrial labour while remaining rooted in the land may actually be harnessed to the benefit of them as well as the urban masses. We have substantial work on this coming from the work of Uzramma and Seemanthini of Dastkar in Andhra.These are truly regenerative in nature, when the questions of cotton farming and weaving are put together.

The focus of Sambiah’s paper is around three things, caste-related occupations of the dalits which are seen to be defiling but essential
to the functioning of market economies. He also considers the physical location of the Madigas in Telengana region, and caste based
humiliations. If one does not consider physical location, he says, one cannot understand why among lower castes, some will be at a greater disadvantage, having less access to education or employment opportunities. Verbally abused all the time, and even Madiga by itself being a term of insult, crippled them in their daily interactions.

Quoting from Italo Calvino’s Invisible Cities, Zygmunt Bauman in his book Wasted Lives: Modernity and its Outcasts (2004) writes of excessive consumption and waste. ‘Why otherwise would street cleaners be ‘welcomed like angels,’ and their mission is ‘surrounded by respectful silence’, and understandably so—‘once things have been cast off nobody wants to have to think about them further.’ As the Leonians in Calvino’s novel,excel in their chase after novelties, ‘a fortress of indestructible leftovers’ surrounds the city, ‘dominating it on every side, like a chain of mountains’ (Bauman 2004, 2). This seems an exact description of the production of waste in all our globalized nations, but unlike the story where street cleaners are said to be treated with respect, we in India have still not devised a way of thanking those who kept our world clean at terrible cost to themselves in terms of health and dignity.

Of consumers themselves, Bauman says they have been trained to avoid dirty gruelling wearying jobs, and the excesses of their lives means that the need for rubbish collectors grow. Waste management is probably the biggest global issue, and the circulation of elites is a bitterly fought site of vantage situations, traditions and abuse. Stratification theorists ask why it is that status and money are so variegated in their appearance. The Dom raja may be rich, or the recycling waste industry might throw up new entrepreneurs, but will they be able to make a difference, in how we think about pollution as essentially intrinsic. The battlelines between dalits and OBCs has not yet been chronicled adequately.

Vijay Mallya, that urbane alcohol merchant, has moved from the market to the House of politics, in terms of the visibility of cultural praxis, and no one asks his caste. For Sambiah, the use of political power is seen to
be the only viable avenue for the cultural mobility of the entire group. He uses Anne Phililip’s phrase the ‘engendering of democracy’ to communicate the necessity of what was a well known fact in the 19th century, with regard to Shanar politics in Tamil Nadu, or in the 20th century with regard to the Mahars in Maharashtra. Venkata Siva Reddy gives us a poem, where the Madigas say that they are the original sons, their heads are bloody, but, the poet says ‘Now, my fight is/Whatever you have. I too should have equally.’ This according to the author is said on behalf of all those who are in the lower stratum of all the castes, whether high or low. Thus, class emerges as the unifying principle among the castes, where equality of life chances is seen to be the leavening feature in experiencing success in the struggle for human rights.