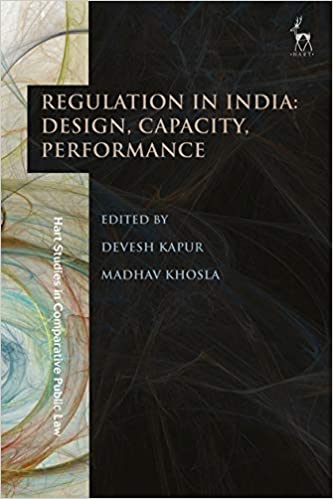 The book is a collection of relevant works on different regulatory institutions in India. Given the paucity of literature on state regulation, the essays offer an in-depth view of how different regulatory institutions in India have responded to streamline the administration of the economy and commerce as a whole. Perhaps, the real focus is along three dimensions—emergence, structure and performance and the fault lines located in each of these. A prior note on how regulatory institutions in India are distinct in terms of their embeddedness in the legal-constitutional system is brought out systematically in the introduction. Regulation, in general, is understood in the larger context of India’s changing political economy in which the dirgistic role of the state in substituted with a facilitator. This is where the duality of freer market but more rules is located.

The first set of chapters rightly encapsulated as the ‘foundation’ delves into the pattern of administrative law as also its implication for the regulatory state. The first chapter with its special emphasis on the structure of administrative law in India has pointed out the limitation of its embeddedness in a strictly defined constitutional structure. Little has been done to locate the ramifications outside the constitutional framework. In that sense the analysis becomes more procedural than substantive. In the present context, regulation and administrative law are seen to be largely driven by the dynamics of global economy and therefore the external dimension of it becomes important to explore. Regulation is largely a borrowed concept and needs to be understood in the interface of international and domestic laws. The second chapter locates the limitation of arbitrariness doctrine in Indian jurisprudence. Article 14 is used as a good illustration for exploring the nuances of constitutional review of administrative action. The citation of relevant cases makes the haphazardness of the interconnection between Article 14 and common law even more visible. Nevertheless, how different elements of Indian jurisprudence are understood and negotiated in the context of decisions over administrative action needed better clarity and explanation. There seems to be a contradiction in the statement about Court’s adherence to administrative laws, yet the laws remaining explicitly unstated. The arguments presented also point towards the need not only of reference to existing administrative laws more generally but also reconstituting them for their ready reference. The two chapters on administrative law clearly converge on this point.