Dharma is More than Laws 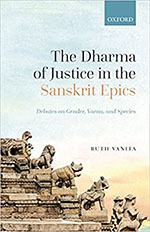 Ruth Vanita’s new book titled The Dharma of Justice in the Sanskrit Epics is a compendium of many articles by her, some of which have been published before and as such not all of it is recent research. Ruth Vanita has been an iconic intellectual who has made significant contributions in the field of Gender and Queer Studies and has been followed widely. Therefore, this book where she discusses at length debates on Gender and Varna, and tales of sex change and gender crossing in the Ramayana and Mahabharata is extremely timely and welcome.

Is the notion of Dharma of Justice static or is it dynamic? Are the epics only an instrument of legitimization of a certain notion of dharma which is splintered on the axis of class, varna and gender or does it represent fearless questioning, a cogent criticism and a strongly-mounted challenge from within and outside patriarchal Brahmanical discourse? Vanita’s essays in this volume make a case for both. The author states in her Introduction that ‘by celebrating supposedly low status characters (such as single women and sudras) as upholders of dharma, who act in ways that laws prohibit, the epics show that dharma is more than laws, and that laws which contradict reality are incorrect’ (p. 1). Vanita then goes on to say that exceptions to rules may be more firmly grounded in ‘knowledge’ than the rules themselves. While it is easy enough to agree with the author on self-realization/knowledge of the exceptional individuals such as Sulabha and Shambuka, what is more problematic is her assumption that ‘rules’ wither away in the face of the luminosity of knowledge. Neither the epics nor the historical reality of Indian civilization allows us to arrive at such a conclusion. Justice is not indivisible because when the rules conflict with ‘reality’, the weight of societal structure seeks to smother the disparaging voices and mould justice to the whims of authority. Thus, Shambuka will get beheaded, Eklavya will lose his thumb, Karna will die unacknowledged as a sutaputra. As for the asamskrta–kanya Sulabha for all her brilliant oratory and fiercely confessed singleness, will remain a maverick, not a female role model in the Sanskrit epics both of which laid the foundation of a unique pativrata dharma which had no precedence in the prior Vedic cultural milieu and yet this new dharma has endured for centuries in the Indic civilization.