Interpreting the Dharmaśāstras: Laws of the Land or Brahmanical Strategies for Self-preservation? 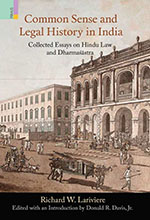 The landscape of Dharmaśāstric historiography has changed considerably since the publication of Patrick Olivelle’s Dharmasütras, The Law Codes of Āpastamba, Gautama, Baudhāyana and Vasiṣṭa (1999) and his critical edition of the Mānava Dharmaśāstra (2004). Hitherto, PV Kane’s monumental work, History of the Dharmaśāstras, was the starting point for any scholar on Dharmaśāstric traditions, that is, till Olivelle re-presented the Manusmṛti in a brilliantly organized and coherent manner, throwing light on the genre of Dharmaśāstra writing in ancient India and helping us understand the context in which they were compiled. In between Kane and Olivelle, several scholars have dipped into the rich corpus of Dharmaśāstric texts. Lariviere is one such scholar and it is only fitting that Olivelle writes the Foreword for this work, commenting on the ‘richness of this collection’ and the author’s ‘sharp intellect, work ethic and attention to detail’.

Richard W Lariviere’s engagement with Dharmaśāstric traditions is evident from this collection of essays, written between 1975 and 1998. They contribute significantly towards the manner in which Dharmaśāstric traditions can be used as sources for tracing the legal history and adjudication processes since ancient times, how they were transmitted through commentaries in medieval times and later incorporated in the legal systems that evolved in colonial India. The essays are meticulously curated and edited by Donald R Davis Jr., who, in a comprehensive and well-crafted Introduction, does a commendable job of introducing the reader to the author and his work. Davis points out how the academic interactions between Olivelle and Lariviere contributed towards creating an enriching academic backdrop for the exploration of early texts and also paved the way for revisiting the Dharmaśāstric traditions and other texts in ancient India; Mark McClish’s work on the Arthaśāstra is one such example.