A Voyage of Discovery into India’s Distant Past 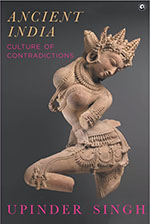 Professor Upinder Singh’s new book is bound to intrigue a random onlooker by its title, since one of the most reputed scholars of early Indian history describes the civilization of ancient India as a ‘culture of contradictions’ at a time when an image of a pristine, monolithic, singular Indian civilization, stemming from ancient roots, is not only being projected but often being enforced, and the voices of contradiction systematically shunned. Singh has outlined in her introduction the difficulty of trying to condense even an introductory survey of (ancient) Indian civilization/s in one volume, and has therefore addressed some of the key contradictions in ideas and attitudes in early Indian history. For this purpose, she has selected five themes: the simultaneous existence of various forms of social inequalities and the universal salvific spirituality; the high culture addressing the notion of desire and the religious philosophies advocating renunciation of all desires; the extreme popularity of goddess cults and the misogyny embedded in social attitudes; the political culture of violence and the religious ideal of nonviolence; and the various forms of interactions addressing contradictions and differences of opinion, ranging from debates to conflicts.

The introduction clarifies Singh’s approach in handling these themes. The study of ancient Indian history has become ‘both a political mine and minefield’, and the tendency of historians to restrict their conversations among fellow historians has created a disjuncture from the common people who have become susceptible to misconceptions and misinformation circulating at the popular level about history. Singh has decided to counter this problem by explaining historical methods to non-historians, distancing herself from both the political ‘Left’ and the ‘Right’, by thoroughly discussing the primary sources which historians use to write their histories, and commenting on the problems and methods of using them to reconstruct  the ancient Indian past. There are examples, excerpts, and anecdotes from primary sources to illustrate certain points, some of which would  be familiar to those who have read Singh’s A History of Ancient and Early Medieval India, but can be extremely interesting and insightful for the lay reader.