Development In The North East 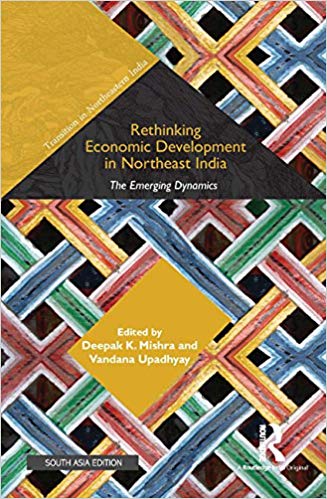 Notwithstanding some scholarly works on disparate issues, works that systematically engage with the process of economic development of the Northeast region (NER) of India are few and far between. This book fills this gap to a large extent by examining the implications of economic reforms initiated in 1991 in India for economic development in NER. The editors in the ‘introduction’ locate the NER in a globalizing India in the light of the debate on ‘globalization and marginalization’, and provide a brief outline of the book.

The development trajectory of the NE region that has unfolded as impact of and responses to the ongoing process of globalization is examined, providing an account of the possible turn that this process may take if the promised benefits of the Look East Policy (LEP) are realized. ‘Globalization and the Indian Himalayan States: Mitigating or Accentuating Marginalization?’ by TS Papola suggests that the NE States have gained very little from globalization in terms of external trade and investment, and in fact, the region faces the possibility of further economic marginalization.

Though simple and limited in scope, the analysis provides useful insights into the recent development process of the region. Atul Sarma’s paper, ‘Economically Integrating Northeast India with Southeast Asia’ analyses how the NE region as the gateway of India is poised to gain through market integration with South and East Asian countries once the LEP is fully implemented. Piecing together historical information, the author provides valuable lessons on types of market integration, which may fetch benefits for the people of the region. ‘India’s Entry into the ASEAN: Some Implications for the Northeast’ by Alokesh Baruah echoes similar concerns.

‘Economic Performances of the North-Eastern Region in the Post-Liberalisation period’ by Mrinal Kanti Dutta and Ira Das examines the growth trends in per capita income, those in NSDP of the NE States and the region as a whole vis-à-vis the national trends, and the changes in sectoral composition of the NSDP. Much of these findings are already known. ‘Employment Challenges in the North-Eastern Region of India: Post-Reform Trends and Dimensions’ by Partha Pratim Sahu and Rajeev Kumar looks into the dynamics of the workforce and labour force participation, employment avenues for women, and the employment content of growth in terms of employment elasticity and labour productivity. The analysis is conventional but useful since only a few studies exist on issues related to employment and labour in the context of the NER of India. ‘Fiscal Issues for the North-Eastern Region’ by Prabhat Kumar examines the fiscal performances of the NE region in terms of the conventional fiscal indicators. The analysis in the chapter reconfirms the findings from existing literature.

‘Land Laws, Development and Globalization in Northeast India’ by Walter Fernandes narrates how transition to individual property right on land enshrined in formal law ignores the role of land as community sustenance, and thereby results in alienation of indigenous people. Certain issues, such as the absence of land records, power structure within the community level institutions, nexus between the elites of community and the state, which are also responsible for displacement of masses from common land, do not receive adequate attention of the author. ‘Agricultural Credits in Assam: A Review of Recent Trends’ by Saundarjya Borbora and Gopal Kumar Sarma analyses the trend in institutional credit flow in Assam across sources, land-size classes and locations vis-à-vis NER and India. The statistical analyses undertaken in this chapter to gauge productivity of agricultural credit and to measure its impact on agricultural GDP are not very insightful. ‘Agrarian Transformation in Mountain Economies: Field Insights from Arunachal Pradesh’ by Deepak K Mishra describes the changes in the spheres of land and labour relations, commercialization of agriculture and process of accumulation in the mountain economy of Arunachal Pradesh in the last fifteen years. This chapter provides important insights into the complex capitalist transition that is underway even in remote hill economies.

‘Understanding the Sluggish Industrialization Process in Northeast India: How do the Industrial Policies Help?’ by Kalyan Das evaluates the effectiveness of the policy of providing subsidies to promote industrialization in the region, and finds it ineffective. Drawing on literature, he suggests that solving the problems of market access and competition, and finance could go a long way in fostering industrial growth in this part of the country. This chapter is a noble attempt at understanding the sluggish growth of industrialization in the NER. ‘Performance and Potential of the Unorganized Manufacturing Sector: A Brief Study of the North-Eastern States’ by Dipa Mukherjee and Rajarshi Majumder examines the growth of the unorganized manufacturing sector (UMS) in the NE States in terms of number of enterprises and employment in rural and urban generic levitra canada areas, and their distribution across size classes. Further, contributions of this sector to manufacturing output and NSDP and labour productivity therein have been analysed. Some of these issues have been analysed in chapter 12 also and their findings are reconfirmed.

The remaining chapters deliberate upon certain aspects of human development and human security in the NER. ‘Emerging Issues of Human Development in Northeast India’ by Nirod Chandra Roy finds the status of human development in the region to be gloomy except for the State of Sikkim. A discussion on the status of human development of different social, religious and ethnic groups of people would have been more insightful. ‘Poverty and Nutrition in the North Eastern Region of India’ by Veronica Pala and Amaresh Dubey presents a comparative analysis of incidence of poverty and nutritional intake in all NE States during 1993-94, 2004-05 and 2011-12. By analysing the nutritional intake of SC, ST and non-ST/SC separately, the authors have dug deep into these issues. ‘Educational Disparities in Northeast India’ by Vandana Upadhyay presents comparative statistics of gender and region in educational disparities but does not explain the variations in these statistics across States in terms of State-specific socio-economic realities. Abhijit Sharma’s paper on ‘Microfinance in the Northeastern Region: Growth and Challenges’ looks into the status of the microfinance sector and analyses its strength and limitations in the NER along with State-specific insights. Two existing models of promoting Self Help Groups have been compared, which helps the readers to understand as to what may work in the context of the region as far as financial inclusion through microfinance is concerned.

‘Inclusive Development, Citizenship and Globalization: The Case of Arunachal Pradesh’ construes the process of Economic Citizenship and its implications for inclusive development through the lens of ethnicity in the context of Arunachal Pradesh. Barbara Harriss-White, Deepak K Mishra and Aseem Prakash have provided an admirable account of how capitalist development and differentiated processes of economic citizenship coexist with state patronage. ‘Governance and Human Security Issues in Northeast India’ by Archana Upadhyay narrates the impediments to human security in the NER through the prism of governance. Focus is on repercussions of the prevailing security and constitutional arrangements, which have been designed to assuage identity aspirations of different groups of people. Certain other sources of insecurity such as human trafficking, environmental degradation which are relevant for the NER and can be looked at through the lens of governance, have not been discussed explicitly.

The book would have been comprehensive in its treatment of the subject, had the following issues been dealt with. First, the editors suggest in the preface and introduction that the objective of the book is to unravel the changes that have taken place in the NER against the backdrop of the larger changes happening in the sphere of economy at the national and global level. Only a few chapters keep this objective in sight. Second, the treatment of the agriculture sector lacks in content. Given the sluggish growth of industry and the fact that the region may not gain in immediate future through market integration, agriculture sector as the major employer can contribute in a big way to economic development by exploring the complementarities of agriculture in the hills and those in the plains. No attempt has been made to assess the performance of the sector and the role it has played in the economic development of NER. Third, identity aspirations of different groups of people play a major role in shaping various political and economic outcomes in the region. The book has rightfully devoted sufficient space and attention to this issue. However, the focus has been overwhelmingly on ethnicity,
and other important aspects of identity
aspirations such as language and religion do not receive any attention. Finally, had the editors built a consolidated roadmap for
development of the NER based on the
findings from individual chapters, the utility of the book would have increased many fold.

Notwithstanding these limitations, the editors have done a commendable job of putting together the research outputs of scholars from within and outside the region. Unlike most of the existing works on the NER, authors of this volume go beyond the conventional narrative of security-development nexus, and thereby provide a fresh perspective. The book will be useful for anyone keen on understanding the process of economic development in the NER.