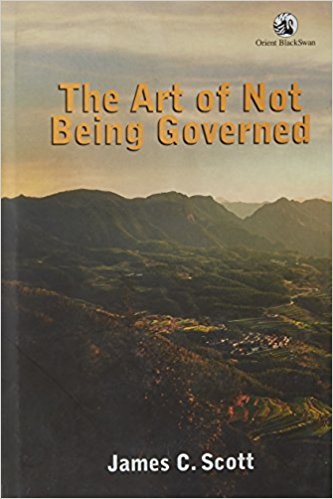 James Scott, in this provocative book, has attempted to write an account of those in the margins, of people living in the peripheries of the great river valley civilizations in history. In the process, he questions nearly every accepted theory and belief about ‘great civilizations’ and their ‘uncivilized’ neighbours.

Scott begins by inverting a long held belief that those who lived in the mountains, practised swidden cultivation, had oral historical traditions, and moved from place to place were backward, pre-modern, and lower on the scale of evolution towards a civilized society. He suggests that, in fact, hill people were living this kind of lifestyle by choice-a choice made not in the ancient past, but one which was an ongoing response to the waxing and waning (oppressive) power of valley states.

The book’s argument centres primarily around the mountainous region called Zomia, which consists of the Burmese highlands, North East India, South West China, and northern Thailand-Laos-Vietnam, but its argument has strong resonance to other parts of the world. Various strands of this argument have been made by historians and ethnographers of Southeast Asia in the past, but this book weaves them together to create a bold and assertive theory of ‘escape’ societies.