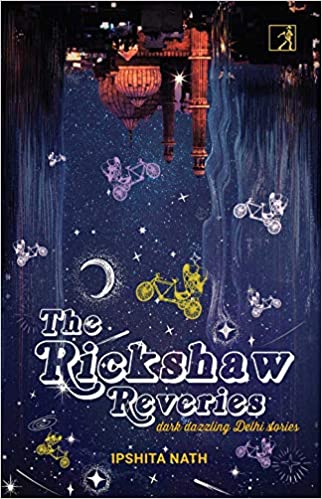 Hold tight. The rickshaw ride could turn unruly as it meanders through the underbelly of an unlikely city that undervalues the compulsive human-driven commuting that crisscrosses its bye lanes. Ipshita Nath’s debut of  dozen stories of rickshaw rides are an act of poignant meditation amidst searing crowds who are oblivious of the realities simmering at the bottom of the city’s shaky foundations. The mute rickshaw is the inanimate character that ferries the stories of embedded frustrations, guttural aspirations, and discreet reflections. Are these the lived experiences of subterranean existence that help theorize situations of the mind as it grapples with the bizarre and the mundane?

That is, until one reads to find that the rickshaw is a mute witness to situations and characters that are in constant conflict with each other. The twelve short stories in the book are interesting in terms of imagination and reach on the study of being, and about nothingness. While Balram’s jerking of carnal lust provoked animal instinct that weighed brutally upon him, Jugal’s desire for justice ruthlessly dismembers those who evade the hands of law. The stories of Balram and Jugal emanate out of irresistible desires, with strength and vulnerability negotiable within the realm of human thought and action. The rickshaw only helps connect the dots between the extreme realities.