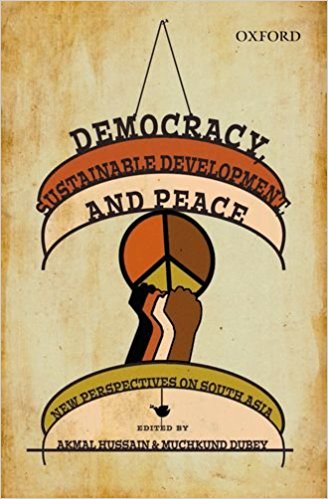 Defining a region, particularly South Asia, is a difficult academic exercise. South Asia shares a common geographical space, though given that regional trade constitutes just about 5 per cent of the total trade flows the intensity of interaction can be questioned. Undertaking a regional analysis of South Asia, with specific country perspectives. Democracy, Sustainable Development and Peace: New Perspectives  on South Asia is an effort to bring together the region of South Asia into the frames of a shared imagination. An imagination, which as the authors point out at the outset, ‘will involve nurturing of rediscovery of consciousness of unity in diversity through the rediscovery of South Asia’s civilizational wellspring’. The integrating pillars of this civilizational well-spring as the authors put it are peace, sustainable development and democracy. Thus, with this as thethematic base, this edited book attempts to synergize the different imaginations (ecological, democratic, economic) of South Asia.

Democracy; Inclusive growth; Environmental Crises; Peace, South Asia’s Development and Financial Architecture; South Asian cultural traditions and Perspectives on South Asia, the seven broad sections of this book filter perspectives on South Asia, and paint a narrative of  the region which takes South Asia beyond the monologues to a dialogic canvas, which traces plurality to its essential form. In this context the historical tradition of South Asia has also been elaborated upon by various authors. For instance, Part One on Democracy, Part Four on Peace and Part Six on shared sensibility on South Asian cultural traditions appear significant, and perhaps provide an effective primer to the complexities associated with South Asian politics, primarily from an inside-outside lens.

Subhash C. Kashyap on the state of democracy in India elaborates on the constitutional idea behind South Asia, and focuses on how this idea has been contaminated by an extensive exercise of power politics. In his words, ‘democratic governance is manipulated through use of flawed processes and use of money and mafia power. The weak, the poor, and the underprivileged become pawns in the power game and barter away their space to marauders of democratic governance for petty temptations’. This he says is one of the major democratic deficits of India as had it not been so, ‘with the vast majority of the people in India being poor and in the category of the underprivileged, it would have been possible for them to occupy the largest space in democratic polity and to have their governments catering to their primary interest’ (p. 34).

Emphasizing on the democratic deficit in Pakistan, Hasan Askar Rizvi explores the military-bureaucracy complex, which has stultified democratic spaces in Pakistan. Rise of the ‘security state, lack of consensus building in politics, restrictions on political parties, relationship between Islam and political system’are some of the factors that have shaped a unique democratic culture in Pakistan. Providing an alternative perspective Imran Ali looks at challenges to legitimacy and peace building in Pakistan. Tracing the present inequities in Pakistan to the legacy of canal colonies initiated by the British and the policies of the Mughal rulers, Ali argues, emphasizes the continuities between the past and the present. Since the legacies of the past are fossilized in structures, they are perhaps the focal areas for any efforts towards peacebuilding. The framework of agreements between the Government of Pakistan and donor community are perhaps the departure point for visualizing a new Pakistan.

In an interesting analysis, Imtiaz Ahmed conceptualizes the distinct political culture of Bangladesh, where polarized politics and the ambitious bureaucratic ladder has ‘reproduced a democratic deficit. Arguing for a cultural approach, which deepens and broadens participation of civil society is the quintessential deliberative question for Bangladesh, which requires attention. Commenting on the postwar society of Sri Lanka, Paikias Saravanamuttu, reiterates too the inhibiting tendency of the political culture built upon dynastic politics and overt centralization (p. 97), as the primary impeder in the effective implementation of ideas. The overemphases on economics over the political, he argues, will be detrimental to the growth of Sri Lankan society and polity in the long term. Sumanasiri Liyanage similarly argues for going beyond the economic framework in postwar Sri Lanka. He argues, ‘the notion of the Sri Lankan nation as an overarching nationalism will be a myth if it gives the idea that such an overarching nationalism conceals the assertion of the hegemonic identity’.

The essays by Rounaq Jahan, Rehman Sobhan and Kamal Hossain take forward the idea of South Asia. Emphasizing normative factors and a focus on democracy with grass-roots presence is what Jahan and Sobhan explore. Kamal Hossain on the other hand provides a blueprint for ‘civil paths’ to peace. According to him political wisdom entails that common challenges in South Asia are taken on board by the South Asian states.

One of the most interesting sections of the book is on South Asian Cultural traditions, where Kapila Vatsayayan stresses the importance of a cultural cartography of South Asia, emphasizing the culture-nature relationship similar to all the South Asian states. The concept of the ‘sacred’, she argues, is very important for maintaining the sustain-ability of the eco-system. The acknowledge-ment of religion in South Asian affairs, Muhammad Suheyl Umar argues, is something that needs to be critically engaged with. M. Anisuzzaman emphasizes on factors such as respect for human life and dignity as quintessential for channelizing and sustaining democracy.

Part II, Part III and Part V  of the book engages with issues of economics, financial architecture and environment. The need to go beyond a growth led paradigm, with an important yardstick of inclusivity coupled with capabilities is what most authors emphasize upon. This argument is substantiated by country specific perspectives on India, Bangladesh and Sri Lanka. The factors which can exacerbate environmental crises in South Asia, have been taken up by Shyam Saran and Leena Srivastava, who see it as an issue area of converging interests. Ali Tauqeer Sheikh by elaborating on Pakistan’s vulnerability to climate change looks at the opportunity for mitigating such challenges in future.

The hybrid analyses in Part VII of the book ranging from democracy, economics, environment, society and politics are a rich contribution. The book leaves out countries like Afghanistan, Bhutan, Nepal, and a chapter on Bhutan’s contribution to ecology and its distinct political culture could have contributed to the richness of the book. However, this compendium is a significant reference text.