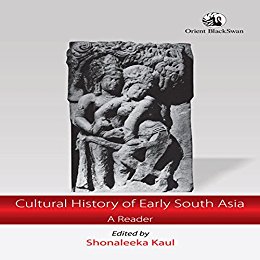 Ideally a Reader is intended to showcase a selection of iconic essays which have contributed directly to the configuration of a particular thematic. This is not easy when the subject at hand is as broad as a cultural history of early modern South Asia and especially so at a time when the idea of cultural history itself has gone through several modifications and mutations. It is therefore, entirely to Kaul’s credit that she has introduced a volume that takes up both a quick guided tour through the messy domain of culture, (as aesthetic expression and as lived experience) as well as presents essays that augment the larger formulations of the introduction and do much more than that.

The introduction sets out the broad agenda of the volume which is to look at a variety of art forms over time and in their context in order to theorize issues of patronage, circulation and consumption—ideas that have enjoyed extensive currency and multiple connotations for cultural and specifically art historians. Very brief, almost tangentially, the introduction clarifies that it adopts a cultural studies perspective in the sense it wishes to look at cultural forms as embodiments of and embedded in experience and meaning making.

This allusion to cultural studies is not developed further, and while it does not detract from the formulations that follow, it certainly raises issues about method and methodology that the new cultural historian is now forced to consider. While the essays chosen demonstrate the rigours of historical method and the introspective consideration of decoding meanings, the introduction does not say very much on the challenges of interdisciplinary methodology that cultural studies and new cultural histories have had to grapple with.

In order to do some justice to what is a well-articulated introduction, let us look at some of the issues that are raised here. The first concerns the issue of patronage, a factor that has increasingly come to be an explanatory category in understanding certain processes in art forms and practices and which has both spatial and sociological connotations. Here too, the act of patronage is seen not so much as part of a political economy as that of a social development that determined production and consumption of art and art objects. Such an approach, it is argued helps us access the more subtle layers of meaning making and signification and at comprehending both the mental universe of connoisseurship buttressed by extensive theorizing on aesthetics as well as the larger and more unexpected public audience for art. This in turn helps interrogate and even break down the more facile binaries of classical and popular/ folk art and to think more creatively of the intersectionality between different genres of objects in circulation.

A second important idea is to do with the actual producers of art, their social status and their location in the occupational chart as well as in the ritual process and which in turn inflected the structures and practices of patronage. Dr. Kaul insists that artists were not passive executors of projects, and were able to lend individual signatures to their oeuvre whose reception was complex. It is the sphere of meanings inherent and constructed in art forms that she wishes to emphasize—how to locate meaning and how that communicates within a larger domain and that constitutes not just one but multiple variants of tradition is ultimately at the heart of this project. It is around this larger thematic that the essays too are arranged. Needless to say, the essays chosen are exemplars of the genre.

I will briefly address some of these essays while connecting the rest to the larger points that the introduction makes. If the making of meanings is the principal theme, we have two interesting essays that speak of technologies of production and style on the one hand and of the scale of form on the other that became effective instruments in conveying and communicating meaning. Jonathan Kenoyer’s essay on the ornament styles of the Indus valley uses an ethno-archaeological approach and usefully classifies the various ornaments that are found and associated with the Indus Valley culture—terracotta bangles, beads strung into necklaces worn by men and women, ornaments of precious metals as well as of cornelian and turquoise. The conclusion that is apparent from this classification is obvious but that in itself cannot detract from the rigorous scholarship involved. What is especially striking is the range of raw material and the replication and reproduction of shapes worn by different strata in society and which certainly would have ensured a coherent structure of beliefs and vocabulary.

The essay that follows on Asoka’s monumental stone inscriptions brings out the communicative aspect of the value system that underlined the Mauryan polity. Upinder Kaur pays great attention to the decorative elements of the pillar inscriptions that convey, in grand and flamboyant symbolism, the larger cultural matrix that accommodated a dominant Buddhist imagination. What is especially important about the essay is the attempt it makes to track the multiple meanings that were assigned to the Asokan inscriptions and how successive appropriations underscore the importance of meaning making and representation under different power structures.

The register shifts with Devangana Desai’s classic essay on terracotta figurines representing more local art practices that speak of a greater demand for them as votive offerings and household deities as well as of a more public and secular demand for these objects. The latter of course was and is usually connected with urbanization and market integration. Desai in the essay outlines a detailed social history of terracotta, its changing and evolving context, a taxonomy of products ranging from those desired in royal households under the Mauryas for instance to more archaic figurines of the mother goddess as well as its control by guilds of potters who presumably maintained standards and transmitted the skills through a system of apprenticeship. The perfect articulation of terracotta art was under the Gupta period when under the patronage of the rich urban dwellers the arts attained near perfection just as its decline came very soon thereafter.

Similar examples of rigorous scholarship and of interpretive analyses are apparent in Vidya Dehejia’s essay on visual communication in Buddhist stupas, where she identifies seven modes, their communicative possibilities to disseminate cultural values especially of ‘dana’ as opposed to ‘daksina’. These visual narratives of the Buddhist pantheon were intended for a wide audience even if mediated by monks and masters. The question of mediated meanings comes up in Uma Chakravarti’s exemplary essay on the Jataka tales that became vehicles for new cultural meanings. Here strategies for telling and retelling were important for even as the structure of the story permitted a certain fixity of meaning to control a particular mode of consumption and reception, there were aspects in the stories that ran completely counter to social norms. The ways in which Uma Chakravarti uses the stories to speculate on the lives of marginal people and the everyday are striking instances of the range of possibilities that cultural history subsumes.

The Reader has other classic essays by A.K. Ramanujan, Stella Kramrisch and Anand Coomaraswamy all of which contribute to the making of this Reader. There is little doubt that the Reader accommodates some of the most important essays on Indian cultural production and which continue to inspire us in extending the frontiers of research and interpretation of all that configures and reconfigures cultural history. The introduction is, as mentioned in the beginning, useful in mapping the ways in which cultural history can be conceived; it could have been written a little more lucidly thus making it more accessible to students of Indian history.

Lakshmi Subramanian teaches History at the Centre for Studies in Social Sciences, Kolkata.