Defining a Political Idea of India 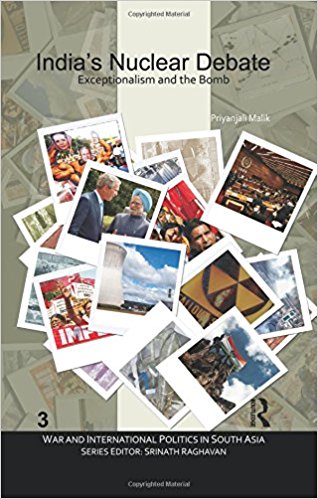 The literature on India’s nuclear weapons—rationale, policy and capability—has steadily grown since the conduct of the nuclear tests
in May 1998. Analysts have written tomes pondering over the whys and wherefores of the nation taking 24 years to openly declare itself a state with nuclear weapons, and the motivations for the timing. Like the mythical blind men, each of whom describes the elephant differently, authors on nuclear India too have presented differing perspectives based on the perch of their understanding.

Adding to the growing body of work on the subject is the new publication of Priyanjali Malik that emerges out of her DPhil thesis. Like all good doctoral studies, the book reflects the rigour of research (evident in the abundant notes, nearly 150–200 for every chapter) and the honesty of compilation of views through extensive readings and interviews. Having footnotes, instead of endnotes, aids the reader to identify the wide ownership of views through a mere shift of glance.

The book presents the author’s understanding of what nuclear weapons signify for ‘attentive India’, a group that she describes as a ‘collective of educated, urban, largely English speaking middle- and upper-middle class’. In newly independent India, as the nation grappled with nation-building and economic development, interest in the nuclear question was confined to a very small group within the government who gave occasional attention to nuclear issues. In fact, as Malik points out China’s nuclear test in 1964 evoked only a ‘desultory debate’.From then to the fervour that marked the national outpouring of views during the CTBT negotiations in mid-1990s, and more recently at the time of the Indo-US negotiations for civilian nuclear cooperation, ‘attentive India’ has grown significantly in reach and influence. The explosion of the media and the expansion of a middle class that is secure enough to rise above the daily struggles of life and livelihood to participate in larger debates on national security are responsible for this change.Historically examining the nature of debate on India’s nuclear policy, the main thesis of the book is that the country’s nuclear weapons define a political idea of India.