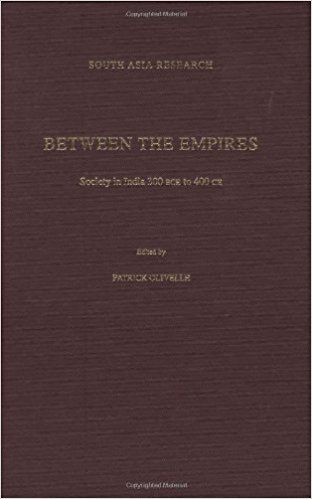 Recent decades have seen a vigorous re-investigation of the nature of the Maurya and Gupta empires, but the historical processes of the period in between remain less understood. This is in spite of a wealth of detail about specific aspects, such as the histories of dynasties, religious cults and trade. This book is the outcome of an international conference held at the Universty of Texas at Austin in 2003, which brought together historians, archaeologists, art historians, numismatists and scholars of literature, law, lingustics, philosophy and religion. It makes a significant contribution towards weaving together several strands of the historical trajectories of the period ‘between the empires’. The contributions are divided into two sections, the first focusing on archaeology, the second on texts.

A problem in reconstructing the settlement history of this period is the lack of chronological stratification in most site descriptions. Dilip K. Chakrabarti’s discussion of urban centres, geographical units and trade routes in the Gangetic plain and Central India is thick in archaeological data. Even more important are the implications of this data, which suggest that the phenomenon of early historical urbanism stretched beyond the contours of the sixteen mahajanapadas known from texts. Jonathan Mark Kenoyer questions the idea of a shift of focus of urban centres from the Indus to the Ganga valleys between the protohistoric and early historic periods. Admitting that the evidence from regional surveys is at present patchy, he argues for the presence of major polities in the Indus valley from the late Harappan to the Maurya periods.