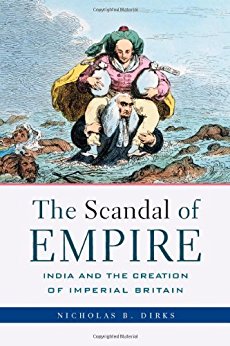 Anti-Imperialist Analyses
Amiya Kumar Bagchi
THE SCANDAL OF EMPIRE: INDIA AND THE CREATION OF IMPERIAL BRITAIN by Nicholas B. Dirks Permanent Black, 2007, 389 pp., 650
June 2007, volume 31, No 6

Capitalism was born with the mark of Cain on its brow. From the voyages of Prince Henry the Navigator in Portugal to the piratical enterprises of Francis Drake and Jack Hawkins (in which the Virgin Queen of England held a share) to the burning of whole islands of the Indonesian archipelago by Jan Coen, the founder of the Dutch empire in the East, the gun of the killer even more than the false balances of the merchant was often the instrument of gain for the pioneering capitalist nations1 . When the shares in piratical enterprises were consolidated in the joint stock of a company, as in the case of the English East India Company (EEIC, from now) and the Dutch East India Company following on its heels, royal or republican charters allowed them the privileges of monopoly trade and empowered them to act as the advance guard of armed conquest in extra-European lands. Hugo Grotius’s code of international law stopped on the borders of Christian Europe. In the seventeenth century CE, the British learned from the Dutch in many areas, including the adage that war was an essential appendage of profit-making enterprise. When Josiah Child, Chairman of the EEIC and an avid student of European political economy, tried the same tactics during Aurangzeb’s time, he was soundly beaten. But the EEIC did not give up. Opportunities for seizing territorial control came up first in Southern India, but the great prize was the seizure of Bengal after the traitorously won victory in Plassey.