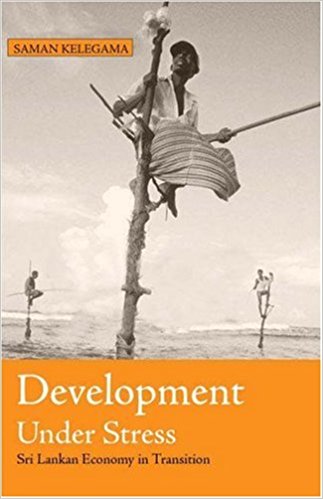 Saman Kelegama is a prodigious researcher who has published his work extensively both in Sri Lankan and foreign journals. In the fourteen chapters of Development under Stress he brings together 12 papers that have appeared in such journals as World Development, Developing Economies, The Round Table, Economic and Political Weekly, Upanathi (the Journal of the Sri Lanka Association of Economists) and as chapters in books and as studies. These essays are made particularly relevant and valuable by his introduction to the volume and two chapters in the first part of the book that discusses the performance of the economy during the entire post-independent period and the pre-conditions for achieving rapid growth and industrialization. These two chapters give a concise account of the country’s economic policies and performance and the constraints to the country’s development process. The three important constraints Kelegama identifies are the welfare state that led to excessive politicization, an export pessimism and the North/East conflict. He observes that: ‘The Sri Lankan development story since Independence is an uneven one characterized by slow adjustment to internal and external shocks, missed opportunities, and policy errors.

Unlike some East Asian success stories, the Sri Lankan economy progressed over the years under a stressful environment. Three key factors could be identified. First, the environment associated with the welfare state (that) led to a highly politicized electorate.