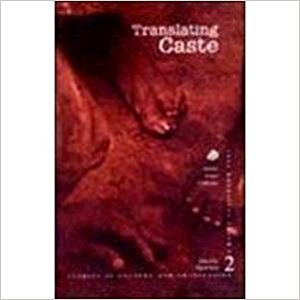 Translating Caste is a significant addition to the literature of caste now available in English. The first English-language anthologies of dalit literature, such as Barbara Joshi’s Untouchable! Voices of dalit Literature (1986), Arjun Dangle’s Poisoned Bread (1992), and the Anthology of Dalit Literature by Mulk Raj Anand and Eleanor Zelliot (1992) have served very well as windows on Dalit writing, especially the radical literature of protest that appeared in Marathi and other languages from the 1960s. These anthologies established the uniqueness of dalit writing in modern Indian literature, even as they drew attention to its conditions of production, to questions of style, genre, and resistance, and to the comparability of this corpus with the literature of indigenous and disadvantaged people from across the world. At the same time, the shared polemical case of these volumes, that the dalit alone may authentically represent his/her experience, and that this was the only authentic experience of caste, was too procrustean perhaps