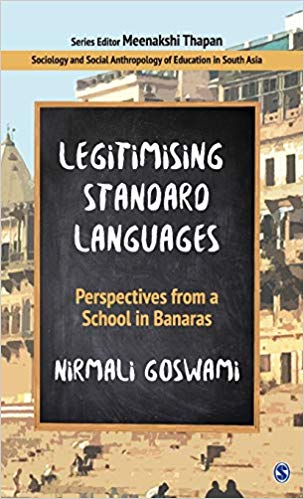 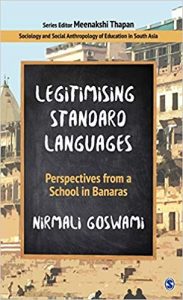 The book under review is second in the series on sociology and social anthropology of education in South Asia edited by Meenakshi Thapan. The series is dedicated to presenting research that brings out the lived context of classroom and school spaces. The aim is to deconstruct school as a space in which young children and teachers engage in various processes while the markers of their socio-cultural existence continually shape it. School, in this sense, does not remain the distribution post of a nation-state’s welfare agenda. It acquires a complex and dynamic existence in which norms and hierarchies get recreated and reaffirmed and also undergo a transformative process. Nirmali Goswami’s book is based on a study that deconstructs language variant—taught and promoted at school—as a site of socio-cultural reproduction of power relations. When language is taught in a classroom, it does not form a benign pedagogic site. All historical, educational and sociological wrangles come alive along with the reconciliatory social mechanisms. The historical dimension of being colonized by another country and the institutionalization of formal schools as per the colonizer’s systems has been dealt with adequately while the author has brought out the elements of power and ideology. She reminds us succinctly, right at the beginning, that in the 19th century, ‘the quest for identity was felt more in the domain of education, because education was the main site where cultural battles for representation and authority over what constituted appropriate knowledge were fought’ (p. 34). And, this is where the significance of the book lies.

Focussing on the context of a school located in Banaras, a city in North India, Goswami brings out the dilemmas and reconciliations that take place when a language classroom serves as a site where the political, cultural and class identities surface. The identities refer to nation-state, class, linguistic region and gender and the language is Hindi. The author has used the school version of Hindi and its wider discourse to analyse the interaction between ideology and culture as mediated by the state in its institutions of education. She has offered an exhaustive analytical and chronological narrative on how Hindi came to be and how it became a symbol of a linguistic nationalism. Using the framework of Pierre Bourdieu and Kathryn Woolard, the author has presented an incisive as well as informative text. It is important for the researchers and also teachers who usually hold on to a static image of the language that deserves to be preserved and fail to acknowledge the forces that shaped Hindi over a period of time. Goswami’s three important conclusions are: (i) Hindi drew its legacy from Sanskrit, so it appeared to have a Hindu heritage and thus got linked with the assertions of Hinduized national identity;(ii) Hindi was born out of Hindustani when the Urdu influence was weeded out from the latter; and, (iii) it engulfed several languages spoken in North India and led to their marginalization as dialects or bolis (to be spoken) such as Brijbhasha and Awadhi (p. 34).

Hindi, English, Sanskrit, Urdu and Bengali are taught in the schools in Banaras in order of preference. Whether the medium of instruction is Hindi or English shapes the larger character, ethos and image of the school. This is consistent with the pattern across India. Goswami made a day long visit to each of the eight schools in order to develop a profile of the Hindi and English medium schools in Banaras. This helped her later to focus on one school in detail. The schools included a madrasa, government run schools, private schools and government-aided schools. There were co-educational as well as single sex schools. The detailed sketches of all the eight schools given in Chapter III are informative with an ethnographic flavour. Some of the schools carry a historical lineage of famous personalities such as Annie Besant. The language-related details in these sketches are very interesting such as one teacher reportedly considered ‘any local variation of language as foul which must be curbed at school’ or that the influence of local dialect was seen as an instance of error in Hindi (p. 69 and p. 70). However, I was disappointed to notice that the author did not use these details while presenting her over-all analysis and conclusions. Methodologically, this important data remains underutilized.

Against the backdrop of eight schools, Goswami has chosen a Hindi-medium private school affiliated to the Uttar Pradesh Board of Education for a detailed study. The school, HKHSS, is a privately managed school which has not received any aid from the State government. Most of the students cover a distance of 1-2 km in order to reach the school. They belong to middle and lower middle income group so they come on foot or riding bicycles and some come on cycle rickshaws. The caste composition of the students was largely what has been described as Other Backward Castes group, an umbrella term for a large number of caste communities. They used several languages at home namely Hindi, Urdu, Bhojpuri, Banarasi, Bihari, Dehati (rural), Theth (straight: often used for dialects spoken in western UP), Kharibhasha and Khariboli (used for another variant of the dialect spoken in western UP), Urdu-Hindi, and so on. No child reported Urdu alone to be his/her mother-tongue even though there were several Muslim children studying at the school. However, the teachers are mainly upper-caste Hindus—except for one Muslim teacher—who are largely low paid and do not have any say in the affairs of the school. They are from low-economic backgrounds who themselves studied at vernacular schools. The author felt a deep sense of despair among the teachers.

At HKHSS, Urdu was offered as an optional subject implying that in principle it was available to be studied by any student who was interested but in reality it was chosen mainly by Muslim students who constituted 23% of the school population. This contributed to maintaining a ‘secular’ image of the school in the eyes of parents and the larger community. Goswami has proposed a new point in her analysis that the teachers’ ignorance about business and service class families and an unfavourable attitude towards the former makes the formulation of the relation between class identity and the schooling chances very difficult. While interviewing the family members of HKHSS students, she found that there was a difference between the speech of lower-middle-class Muslims from the Urdu spoken by Hindus and Muslims living in mixed neighbourhood settings. ‘Pure Urdu is clearly seen as an exclusive cultural resource, but its practice is not necessarily increasing in families.’ However, ‘the use of standard Hindi is visibly on the rise among families from both service-and business-class segments. Within one family one can notice the use of mix-repertoire, particularly in joint families, where the young ones are actively encouraged to speak in Hindi while the elderly are still using the home variant’ (p.139). Goswami found an emergent sense of shame towards home languages especially in those families where there was an aspiration to move towards formal sectors of employment.

The occupations practiced by the HKHSS students’ families and their aspirations for the future had a bearing on how they engaged with their children’s formal schooling. They valued Hindi and English and equated them with better learning. They insisted on a purer Hindi in their children’s language and perceived the interference of mother-tongue or the local language as pollution. Mothers were particularly the custodians of the newly acquired skills of speaking in Hindi without using the vocabulary of any other language. They even controlled their children’s play behaviour in order to discourage their interaction with those who may continue to use the local language (pp.141-143). The entire family contributed to the perceived linguistic status-quo, which provided a sense of upward mobility. It is a pertinent thesis as it helps us to capture one of Goswami’s key points that power relations and ideology come about in play in educational settings.

In the larger context Hindi is not a language anymore that can prove helpful in being economically mobile or accessing better employment opportunities. The author has established this point adequately with the help of existing literature.
In Chapter VI, ‘Boli ka Prasaar, Shuddhata ka Prachaar’ the author has presented the analysis of teachers’ ideas on the issue of language that she accessed through the means of interviews and classroom observations. The data is interesting, as the author has managed to extract some extremely relevant ideas in her conversations with the teachers. The analysis corroborates the author’s central thesis that the emphasis on a version of Hindi, English and in certain cases Urdu at school led to the marginalization of other variants of languages which are prevalent and used in the larger ethos. In this process, the otherwise rich source of literary repertoire such as Brijbhasha is also condemned and found irrelevant. On the other hand, English maintains the promise of ‘affluent future and participation in a wider community across classes and communities even if the children are not able to acquire the culture associated with it’ (p. 185). The author has aptly used Bourdieu’s construct of cultural violence and presented a threadbare analysis of how formal setting becomes coercive in its subtle ideological frame when it tends to devalue people’s existing way of life and identity. In this process, the teachers play a complex role. They contribute to the devaluing of home languages and also resist some of the undercurrents. Their evaluation of students’ abilities and judgements come across as a significant site of their power play. The study offers the lived experience of educational policies, framed at the Central and State level, and their limitation in penetrating a school classroom. The teacher emerges as the custodian of certain orthodox ideas and also the carrier of the ideas that get generated due to a prevailing hierarchical social structure and reorganizing economic order. In this attempt, the study presents a school in its web of relations with all the socio-economic structures of a community. Goswami makes a significant contribution also by presenting an exhaustive background literature on the subject. However, one error cannot be ignored in this context which is that she has mentioned Political Agenda of Education by Krishna Kumar as an edited volume and assumed that all its chapters have been written by different authors. As a result, there are four separate entries on the same book in the bibliography. Notwithstanding this minor error, the book makes an important contribution as it offers a complex triangulation of teachers’ work, parents’ role in their children’s education, issues of language, school and the large political structure.

Latika Gupta is Assistant Professor in the Department of Education, University of Delhi, Delhi.