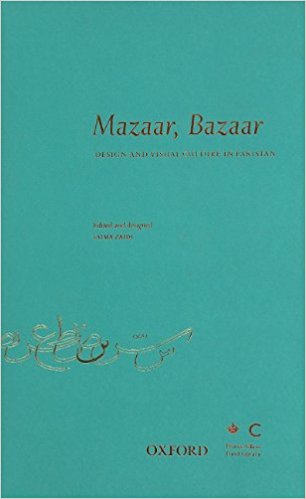 Fat, oblong, register-shaped, its densely packed (and extremely unwieldy) 347 page body encased in striking turquoise and gold,
Mazaar, Bazaar: Design and Visual Culture in Pakistan, landed on my desk a couple of weeks ago; carrying with it the images, iconography and essence of a country and civilization so near and so akin to us, and yet so unknown. Though India and Pakistan share borders, ethnicity, and a common history of several thousand years, for the past 63 years a curtain has veiled us from each other—created by politics, war, and incompatible national agendas. It is not an iron curtain; more the latticed, brocaded curtain that once separated the zenana from the outside world. We catch occasional glimpses and garbled half-whispers, and the enforced separation both tantalizes and distorts. There is intense fascination and curiosity—almost obsession. When the curtain parts of its own accord, we embrace each other; when politics or war tears it asunder, there is bloodshed and a sense of cruel betrayal. The cliche, ‘love-hate relationship’ has never been more apposite.

Mazaar, Bazaar parts the curtain for us. The view, candid and wide-ranging, untouched by the Photoshop of chauvinism or censorship, is revealing and enthralling. In 33 riveting essays, written by Pakistani and international scholars, artists and social and political commentators, Saima, a communication designer and lecturer on design and typography at the Indus Valley School of Art and Architecture, explores ‘the interaction between visuals and their viewers.’ Advertising, religious iconography, film hoardings, graffiti, portraits of national leaders, political cartoons, match-box covers, miniature painting, the scenic backdrops of roadside photographers, all are part of her canvas.Visual media is a hugely important component in creating national identity, especially in a country only six decades old and with less than 50% literacy. After partition, Pakistan had to invent itself anew, and Mazaar Bazaar unwraps and elucidates some of the mechanisms and mythology.

These range from passport stamps, party symbols, and currency notes to air hostesses uniforms and the artwork on trucks and buses. (Decorating the latter can cost up to 2 lakh rupees—a proof of its perceived value to both owner and viewer). There is a brilliant chapter by S. Akbar Zaidi on how Jinnah’s official photographs gradually metamorphosed from natty, anglicized dandy in monocle, three-piece suit and spats to the achkan-wearing, karakul-capped image Pakistanis revere as their Quaid-e-Azam. As one Pakistani reviewer put it, this ‘vibrant, sensual picture of Pakistan’ is ‘the best book on Pakistan this year, maybe even this decade.’ One, as another said, ‘that will prove an invaluable resource for anyone drawn to the images, icons, impressions and interpretations that capture what it means to be Pakistani.’In Duree S. Ahmed’s essay The Journey, he chronicles the depiction of the popular mythological figures, Buraq, Jhuley Lal, and Zuljinnah—the South Asian folklore versions of the universal theme of the Hero and his Quest. The metaphorical questions that are at the heart of the Hero’s journeys—‘Who am I?’, ‘What is the meaning of life?’, ‘Where do I come from?’ and ‘Where will I go?’ are poignantly pertinent in the case of this newly emerged, often troubled land, engaged in its own quest for identity. Saima Zaidi’s book signposts the paradoxes, and also captures some of the multiple, complex answers.

While documenting the official post-partition attempt to create a single monotheistic, mono-linguistic, and mono-cultural nation, Mazaar Bazaar confirms that, even with Bangladesh removed from the equation, the mix of Punjabis, Sindhis, Pashtuns, Baluchis, and Mujahirs is as culturally diverse and occasionally combustive as our own country. Nor is it accurate to say a common religion can transcend and bind all these together. Sunnis and Shias, Ahmedis, Bohras, Ismailis, and Khojas are as alien and at times antithetical to each other as Pakistani popular propaganda imagines Hindus and Muslims to be. The recent attack on Ahmediya mosques in Lahore is only one scary example of the underlying fissures in Pakistani society; so easily manipulated by politically motivated or fundamental forces.
How does the newly emergent Pakistani state deal with this? Does it embrace and celebrate diversity, or push it under the containing carpet of a broadly common collective identity?

As Naazish Ata-ullah says, ‘the state’s restricted solution to the predicament of national identity as constituted through the visual has been manifested through a patronage of identifiable “Islamic” genres such as calligraphy.’ Nevertheless, as Mazaar, Bazaar vividly demonstrates, in Pakistan, (as in India), popular culture and iconography as well as contemporary art, mercifully continue to rise above the insipidly generic. In multiple, lively and individual ways, Pakistani visual design proclaims its varied, multifaceted and multicultural past, as well as its eclectic borrowings from contemporary western sources as diverse as Hollywood films, Barbie Dolls, and Superman comic books.

Her book therefore includes Hindu Gods and heroes, Gandhara and Harappa, as part of that inherited cultural reference from which Pakistani visual design takes its inspiration, but which is seldom officially acknowledged.Stamp collecting is an innocent pastime; once the hobby of King George V and every schoolboy; now likely to be rendered redundant by email and text messaging. But it is also a way of encapsulating a nation’s vision of itself. One of the most fascinating chapters in Mazaar Bazaar is Adil Salahuddin and Rubina Saigol’s reconstruction of Pakistan’s official history though its postage stamps. As they point out, ‘Stamps are political signs of the Government in power … used to signify triumphs and victories, and to silence and hide what cannot be acknowledged. … Signs may take on a life of their own not intended by their maker … A fractured, multiple and interrupted reality emerges rather than a simple and linear narrative.’ When Pakistan came into existence in 1947, the Nasik Printing Press of India stamps with King George VI’s head were overprinted with the word ‘Pakistan’.

The first Pakistani stamps, bearing the star and crescent and postmarked Pakistan Zindabad, came out in 1949. The initial purely aesthetic and scenic images gradually began to include the faces of national leaders, and stamps were brought out covering political issues like Kashmir and Indo Pak prisoners of war. The Bhutto period marked the gradual emergence of human rights issues and depictions of women, justice and the green revolution, counterpoised by the increase in religious and Islamic imagery in the Zia ul Haq and Nawaz Sharif regimes. Other dominant themes were sports nationalism celebrating victories in cricket and squash, Benazir’s deification of her assassinated father, and the nationalist and military imagery of the Ayub Khan and General Musharaf eras. Pakistani stamps tell the story of a country proactively creating its own history. As eloquent as the images are the omissions: defeats in successive Indo Pak wars, the military takeovers, the curbing of the judiciary and women’s rights, the ‘Islamization’ of education. The exit of Bangladesh goes unmarked except by the disappearance of Bengali as a second script. ‘No stamp marked the tragedy of East Pakistan’ notes Rubina. As the authors say, ‘Stamps are like weapons, deployed for self-defence and national glory. They are not allowed to recount tales that rupture the official story.’ How revealing a contextualised and analytic study of Indian and Pakistani stamps, side by side, era by era, would be!
In the subcontinent, the religious and material are intertwined. Mazaar—the Shrine, and Bazaar—the Market; both are an integral part of our psyche, lifestyles, and society—often occupying the same place and worshipped side by side. Saima Zaidi’s Mazaar Bazaar, six years in the making, deconstructs these interlinked strands and their symbolism in official and popular visual culture. It is an important and revealing book—not just to understand Pakistan, but to look at and understand ourselves. Whenever we get close enough to Pakistan to see beyond the rhetoric and the politics, one is struck by how similar our two countries are!

This book, from the Bollywood lookalike Lollywood film hoardings and election symbol symbolism, to the posters for pehelwan wrestling bouts and Rooh Afza, only reaffirms this. Not surprising, given our shared cultural roots and visual heritage. Is this reassuring, or the reverse? Whichever way you look at it—read this book! Despite occasionally turgid prose and too tiny print, it is amusing, enthralling, enlightening—a journey worth taking.

Incidentally, introspecting about image as metaphor, give this a thought: The candidate with the lota symbol fared badly in the elections—was the lota too suggestive of that most basic of human ablutions.