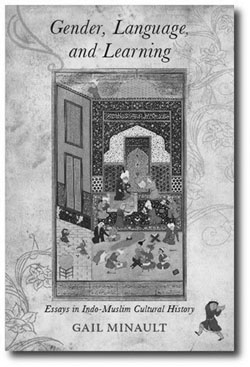 In a chapter not quite characteristic of her general scholarly procedure as a historian, Gail Minault in the middle of this book cuts loose to attempt a sustained comparison between what she calls ‘the Delhi Renaissance’ and the far more lauded ‘Bengal Renaissance’—which should perhaps be similarly and more accurately called the Calcutta Renaissance. Beginning by seeming to acquiesce in the received wisdom that the Delhi Renaissance was ‘a poor up-country version of [the] dynamic example of cultural interaction’ represented by the Bengal Renaissance, Minault proceeds to highlight the differences between the two and thus the distinctiveness of the cultural situation in Delhi through that transitional and transformative age. While the Bengal Renaissance was launched with the Bengalis learning the English language and other subjects also through the medium of English, the teaching in Delhi College on the other hand was all in Urdu, through translation.

The project of translating, and thus mediating, western knowledge flourished through the efforts of teachers such as the legendary Master Yesudas Ramachandra. Delhi College had white principals such as Boutros and Sprenger, with the latter infamously failing to recruit Mirza Ghalib on the faculty by not leaving his chair and going to the gate to ceremoniously receive the candidate, who thereupon promptly and indignantly went back home in his palanquin: Ulte phir aaye dar-e-Kaba agar vaa na hua. (I’d come back even from the door of Kaba if I find it not flung open.) But the teaching was based solidly on our own indigenous tradition and languages, and it is through the medium of Urdu that the renaissance in Delhi, such as it was, is seen to be happening in this book.

Another major difference that Minault points out is that while the bhadralok in Calcutta were a recently formed and socially variegated class, the asharaf (gentlemen; plural of sharif) of Delhi were nothing if not khandani, i.e., an elite that had been entrenched in their privileges for several generations and even centuries. In other words (than Minault’s), if the bhadralok sought to climb the ladder of English and western education in order to become upwardly mobile, the ashraf of Delhi were already so high up in terms of education, culture and privilege that they looked down upon western ways—until they themselves began to slide downwards with some rapidity especially after the cataclysmic events of 1857.

The newly aspiring bhadralok had so little to lose that they could only go up; the ashraf had so much to lose that they could only go down. The ‘Mutiny’ caused a rupture that, besides its obvious and almost incalculable political consequences, realigned the whole cultural balance of India. The Muslims of North India, somewhat unfairly treated as the main culprits, went on to become, at least educationally, one of the most backward communities, while the bhadralok, loyal to and indeed idolizing the British, stole an enormous first innings lead intellectually over the rest of India which continues to stand them in very good stead. Soon afterwards, in Percival Spear’s memorable phrase, the dhoti was hung from Calcutta to Peshawar. Even a lucky break or two may have helped redress the situation—for example, if Muhammad Iqbal too had won the Nobel prize—but that was not to happen.

Such broad counter-historical conjectures, however, are not for Minault and it may indeed be unjust to hang them on the peg of her eminently sound, reasonable and moderate book. In its twelve chapters divided neatly and equally into three sections with the three keywords in the title providing their rubric in that order, she puts down nothing that cannot be substantiated with a direct reference to an archival source. Nor does she have any truck with the terminology and buzz-words that have now become the staple of history writing in and about South Asia, so much so that if the ‘Gender’ in her title were replaced by ‘Women’, her argument would lose none of its resonances.

Minault is already well known for her monographs on the Khilafat movement (1982) and the education of Muslim women in North India (1998), and these essays, previously published between 1974 and 1997, could be called Chips from the same Workshop (to evoke a title from Max Muller who for Minault would seem to inhabit a different planet). Even when she writes about language, i.e., Urdu, her focus is not at all on the Urdu-Hindu divide, for example, but instead on magazines for Muslim women and on the ‘Begamati zuban’, women’s language as spoken amongst them in the domestic inner domain, though the major examples of it that have survived are often reconstructions by male novelists such as ‘Deputy’ Nazir Ahmad. Several of the essays here are about cultural leaders and educationists of the late nineteenth and early twentieth centuries, worthy but modest figures whom Minault rescues without making tall claims for them. The one big essay at over fifty pages, co-authored with David Lelyveld and already well-known in the field, is ‘The Campaign for a Muslim University 1898–1920.’ The demand is for an institution which will be exclusive in identity and would be allowed to set up affiliated colleges all over the country to consolidate a pan-Indian Muslim identity; the governments in Calcutta and London are wary that this may lead to revivalism and separatism. No less intense are the rivalries among the campaigners: now the Aga Khan flounces off and now the Raja of Mahmudabad. Finally, they grab what they can get, with other universities coming up at the same time in Dacca, Lucknow and Delhi (Jamia) also to cater to a largely or partly Muslim constituency. The Banaras Hindu University has already got going in 1916, and ‘all sections regarding government powers’ from its constitution are now copied verbatim into the draft constitution for the Aligarh Muslim University.

One or two essays here are marked by what Minault calls ‘overlap’, and at a couple of places, there are odd little lapses of transcription such as ‘bhina (younger sister)’ (p. 121), presumably for ‘bahina,’ ‘kathi’ (p. 126) clearly for ‘khatti’ (sour), and ‘Chandni Chalk’ (p. 132) for whatever. On the whole, Minault writes in a style so clear and limpid as to be exemplary: no flourishes of any kind, no syntactical complexities or convolutions, no straining after any kind of notable effect, and sentences sometimes so short as to evoke wonder and envy, for example these two right at the end of a chapter: ‘The latter [a school] bears his name. It is an appropriate memorial.’ Minault must be a copy-editor’s dream.