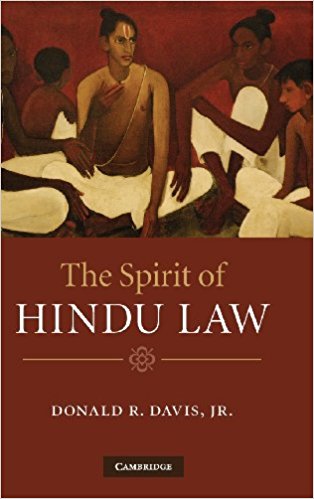 The Spirit of Hindu Law interestingly takes law beyond its legal definition and tries to relate it to the ordinary world. It talks of its ethos as well as what constitutes Hindu law and how it operated. To our minds today law is a very impersonal gigantic structure that seems almost impenetrable. We may see it read about it fear it even live within its bounds but we certainly do not relate it to our day to day life. As Donald R. Davis correctly points out in todays secular world the religious realm is often seen as primitive anti-modern and dogmatic; and religious laws can and do clash with the accommodation of the ideas of pluralism.
At the outset the book declares that it seeks to …take advantage of Hindu laws unfortunate exotic status to reveal underexamined presuppositions in current understandings of the nature of law and to suggest certain beneficial lessons that may be learned from the Hindu legal tradition (pp. 11-22). The dharmasastra being the bedrock of Hindu law it is a herculean task to translate various Sanskrit words into English a language with completely different cultural nuances. To start with as a Hindi speaking person I felt I always knew what the word dharma meant. However if I need to explain it to someone from a different religious background what would my answer be? Religion? No it is not as simple. Can we say faith? That makes Hinduism the stereotype that the West has usually classified it to be. So the book starts by defining dharma to be a much complex web of privileges duties and obligations (p. 19). However it also brings up that the Dharmasastra itself shows a reluctance to define what dharma is.

It is fairly clear that the book would be read by scholars of various disciplines especially those engaged in history religious studies philosophy and legal studies. Some of the comparisons that the book draws to elaborate certain arguments also point to the fact that the work would also be fascinating to readership not too familiar with Asian religions and the Hindu legal fabric. For instance to explain the idea of coexistent svatvas or identical adhikaras being shared the analogy of ownership of an mp3 file or the copyright issues involved in downloading music is used which more or less does convey the concept (p.101).

Significantly there are no attempts to find intersections between Hindu religious law and the religion or law of the West. Thence the attempt to study the laws of Hinduism is done not in relation to anything but as a field to be explored in itself. Instead the book often draws interesting parallels between Hinduism and Islam; and sometimes also Jewish traditions especially in the social contexts of these religions. A very relevant point is highlighted: In Hindu law as in Islamic law the law presupposes that membership in a family is a natural condition among humans and that individuals will rarely become totally bereft of family connections (p. 35). Elsewhere it compares the three and concludes Of course the parallels are not perfect but the commonalities are sufficient to show a widespread view of law in which law is a path or a way that is forged through acts of interpreting legal sources (p. 64).

As far as the political ruler is concerned the book justifies itself in not viewing him beyond the considerations of the Dharmasastra but the continuously changing state structures of the ancient and early medieval north India are not referred to. Considering that religion and statewere completely intertwined and to a large extent still are makes this omission problematic. The Indian political framework underwent very important changes from the early Vedic era to the Mauryan times when the state takes the shape of an empire. The political leader now becomes a full-fledged ruler from a tribal chieftain earlier. Could this have any implications for his changed ritualistic rolesboth as a ruler as well as the patron that he was? Did that in any way change or rather affect the writing and compiling of the normative dharma texts? Does the legal tradition remain untouched by these stages of such complete political change?
As late as chapter 7 the book clarifies that historicizing has not been its primary focus. However without historicizing one cannot put a religious law into the context it belongs to (not necessarily in terms of chronology). One certainly then cannot figure out why a certain text or a body of texts changes its contours over a span of time. Or as to why the essence or nature of even dharma and its components what it expected and largely professedcould undergo changes or many a times would contradict what had been already written and accepted. There are points where the dharmasastras themselves have contradictory stands pointing that they were not a cohesive body of literary texts and that it would be wrong to assume them to be. An interesting reference point could be the Arthasastra of the Mauryan period which clearly puts artha over and above both dharma and kama.

Not only were the Dharmasastras compiled over a long period of time but they were also a collective body of texts written by a host of authors in different regions too who unanimously looked up to the Vedas as their primary source. Unless the region political structure and socio-economic milieu in which a particular dharma text was compiled and codified is taken into account the context of many of the changes/ difference of opinions within the dharmasastras does not become very clear. By political structure I do not mean the rajdharma(the book mentions it is not the focus of the current study) but merely the political framework that was evolving in the Indian subcontinent while a particular dharma text was being written.

These questions may be the queries of a student of history but the book does well to go beyond theology to look at Hindu law which has Hindu dharma law and philosophy overlapping. The book does present certain valid criticisms as well as problematizes the various components of the dharma discourse of Hinduism making it valuable reading.The underlying argument is appropriately summed up when it says Religious legal systems such as Hindu law reminds us that legal or at least law-like processes and institutions function in even the most ordinary of human contexts that law is not necessarily the sole province of the state and that law enables human flourishing as much as it constrains human vice (p. 178).

Ruchika Sharma is Assistant Professor (History) at Kamala Nehru College University of Delhi
She has recently submitted her PhD thesis titled Conjugality Concubinage and Domesticity: Native Woman and the British Male in Early Colonial Bengal at the Centre for Historical Studies in Jawaharlal Nehru University.