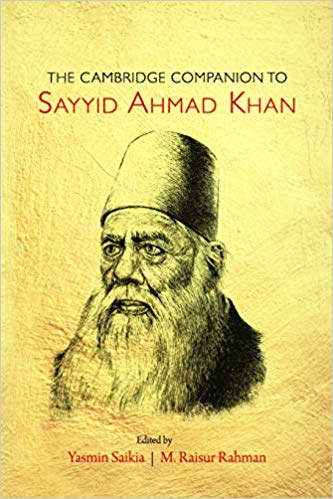 The Cambridge Companion to Sayyid Ahmad Khan, published on the occasion of the 200th anniversary of the birth of Sayyid Ahmad Khan (1817-98), fittingly includes contributions by historians, political scientists, literature scholars, and a specialist in religious studies. A renaissance man himself, Sayyid Ahmad well merits an interdisciplinary perspective. He was a pioneer ‘modernist’ in his religious thought, a proponent of both scientific and historical learning, a social reformer, and the founder of an English-medium, European-style institution for higher education, now known as Aligarh Muslim University (AMU), that continues today as one of India’s premier universities. As Frances W Pritchett writes, ‘[Sayyid Ahmad’s] long and adventurous life contained two or three ordinary lifetimes full of activity’ (p. 159). The editors contend that Indians today either forget this remarkable man or, if they remember him at all, dismiss him as ‘communalist’. Editors Yasmin Saikia and M Raisur Rahman rather maintain that Sayyid Ahmad favoured cooperation between religious communities and, if he put foremost the need for education for struggling Muslims, targeted by British post-Mutiny suspicion and rage, he did so not only for their sake but for the well-being of the country as a whole.

The editors, however, succumb to unnecessary praise. ‘Sir Sayyid’, they write, ‘is the most brilliant and unusual reformer of India who was perhaps the first to adopt the method of non-violence ….’ (p.xiii). He undertook an ‘education mission of empowering the vulnerable and the downtrodden’ (p.xiv). ‘[He] transformed the lives of Muslims in India and abroad forever’ (p.1). Perhaps hyperbole deserves a pass given the grim reality of structural disadvantage, discrimination, and violence directed against Muslim Indians today. But far better, as many of these articles do, is to simply show Sayyid Ahmad as a person of considerable influence, sophisticated and wide ranging in his intellectual and educational projects, personally courageous, self-sacrificing—and, like all of us, a person of his times with some values, at least, that later observers consider problematic.

Mirza Asmer Beg is particularly persuasive in showing Sayyid Ahmad’s political thought in the context of his times, taking up the Hindi-Urdu controversy over the official language (as each was beginning to be associated with Hindus and Muslims respectively) and disagreement over the Indian National Congress. Sir Sayyid believed Urdu to be Indians’ common heritage; it was Hindus, Beg shows, who were challenging syncretism, glorifying a Hindu past, and implicitly giving expression to Hindu communalism. Beg’s conclusion: ‘Accusing Sir Sayyid of being communal and exclusivist for advocating the cause of Urdu and exonerating the supporters of Hindi of all charges (for doing exactly the same thing in their support for Hindi) would be a great injustice….’ (p. 183). As for the INC, leaders of the Hindi movement were front and center in its organization, he writes, as were undertakings like the Ganapati celebrations that denigrated Muslims. Sir Sayyid, moreover, made the classic liberal argument that political participation required free-acting individuals, an impossibility in an Indian society ‘trapped’ into various communities. He also feared that ineffective actions would, as he declared in a speech in 1887, do nothing but ‘produce a useless uproar to raise suspicion in government….’ (p.187). Throughout, Beg points out, Sayyid Ahmad worked with like-minded Hindus. Beg reminds readers, too, that the nationalist hero Bankim Chandra Chatterjee displayed violent hostility towards Muslims and expressed every bit as much loyalty to the British as Sir Sayyid did. Aurobindo Ghosh dismissed the INC as irrelevant. Just as each well deserves a place in India’s national history, so too does Sayyid Ahmad.