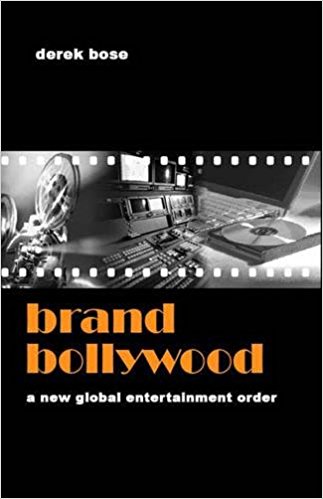 Brand Bollywood by Derek Bose is a study of the commercial possibilities of popular Hindi cinema of Mumbai. It looks at the many strands of technology available to increase the revenue of Hindi films. These include the traditional screenings in old-style cinema halls, contemporary multiplexes, Regional and National Television Channels, paid internet downloading (on payment) of films, and the beaming of Bollywood films via Satellites to North America, Europe, parts of Africa and the Middle East, and South East Asia. Bose makes no bones about advocating the cause of Bollywood cinema, which he sees for what it is—a product. But, he feels, in quality the product from Mumbai is getting closer by the day to that of Hollywood, U.S.A. As far as he is concerned the Hollywood film, both artistically and technically is the ultimate in the art of filmmaking. Why he feels this way the reader is not able to fathom, but perhaps he does!

He seems to think the great Japanese masters like Akira Kurosawa, Kenji Mizoguchi, Yashujiro Ozu and Mikio Naruse were probably mere hacks in the employ of major Japanese studios from the 1930s into the 60s. However while one does not want to go into polemics in a review one cannot but resist saying that his taste in films is appalling. He, for instance thinks that Ang Lee’s Crouching Tiger, Hidden Dragon, is a masterpiece perhaps because it was a huge commercial success and an Oscar Winner : both dubious distinctions.

Crouching Tiger … is nothing but a Hong Kong Chinese martial arts picture with well-done stunts thanks to the wire-work experts. Bose, does not seem to have seen the poetic martial arts films by the master King Hu, whose career had ended before computer-generated special effects had come into being. Bose hopes that one day, very soon Bollywood will be able to recreate the Mahabharata on the same scale as the Hollywood extravaganza Troy, if it collaborates with three or four international production houses. Unlike Schumacher, he believes that big is beautiful.