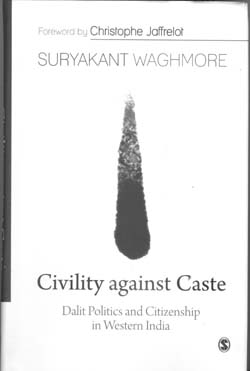 This book once again foregrounds the on-going debate on how to approach and conceptualize civil society in India. Is civil society a ‘realm of freedom‘ or a realm of hegemony? Is it a ‘bourgeoise society‘ that introduces the processes of individuation and breakdown of community relations or enables in forging civic ethos and civic community as against traditional hierarchies? The variations in approaching the concept of civil society are doubly compounded when we begin to discuss it in the context of caste. Part of the problem really seems to be that while discourses and analyses, over the last few decades in India, have surged ahead exploring the various modes of democratization, including ideas of ‘secularization of caste‘ and ‘politicization of caste‘, these have remained as very selective instances in the life and dynamics of caste based exclusion in India, and they highlight very marginal and partial achievements by the anti-caste movements.

Caste-based practices continue to be predominantly violent, invoking everyday forms of exclusion and humiliation. For Suryakant Waghmore this reality does not get represented in the debates on how to approach civil society. It is in this, he argues, that constitution of civility, and civil/civic spaces squarely belongs and is part of the emancipatory project of anti-caste movements. Anti-caste movements struggle routinely to construct these spaces and in the process are effectively attempting to construct and strengthen civil society in India. He says, ‘the moral impediment that liberals favour of deliberative procedures, politeness, rational communication and undoing of status privileges in the practice of civil society are not antithetical to the freedom of dalits. The liberal procedures and institutions of civil society are crucial to unsettle the traditional modes of civility that constructs dalits as lesser subjects‘ (p.202). Having said this, Waghmore does note the problem that the dalit movement itself deploys extra-institutional forms of mobilization, including use of violent modes, which ‘do not fit the liberal ethos‘. Though he does not further interrogate this problematique, as to what the concrete effect of this denial is in the way dalit struggles are perceived, by those inhabiting and those aspiring to become new entrants of the civil society? Where is the faultline between the civil society as it exists and civil society as an aspirational ideal of those currently marginalized? How does the latter, in a substantive sense, differ from the former idea of civil society? How does it transform that domain which deploys and carries a range of practices that are declared to be uncivil in order to gain entrance to existing civil society? Will it continue to remain within the limits of liberal ethos or does it go beyond? Would it then be a category mistake to refer to this domain as essentially a liberal civil society that dalit struggles are constructing in course of their everyday interactions? These are some of the questions that can be posed in order to contextualize this book.
However, one can very much understand the core concern of Waghmore as someone responding to the insidious modes in which caste operates and excludes, based on his rather thick ethonography. It is therefore possible to understand his concern of moving from traditional hierarchies to contractual relations, in the liberal mode. Contractual relations offer basic protection, freedom as exchange relations, and secular options of exit. However, the same contractual relations thereby—because they are based on contractual relations and quid pro quo relations— undermine ideals of solidarity and fraternity and instead promote instrumental reasoning. Again, how do we move beyond this impasse in the context of caste in India? This book provides us an opportunity to bring this issue into relief. Waghmore is also upfront in his critique of postcolonial scholars in their dismissal of civil society only as a domain of the elites, thereby ipso facto ‘condemning‘ the subaltern to an existence of incivility. Some of these theories neglect and undermine the subaltern aspiration to move into the realms of civility and civil society. However, even here we need to raise the issue that we alluded to before, how else do we then dignify the extra-institutional modes of mobilization that dalit movement itself resorts to, and which are consistently undermined by the liberal ethos? As Waghmore himself observes, in discussing the strategies of the BSP, that it has attempted ‘substantialisation process of caste and not its annihilation‘, which is an acknowledge-ment of the postcolonial mode in anti-caste struggles. The shift to using caste itself in order to fight caste precisely moves beyond the known liberal mores, and this would be in contradiction with the basic thrust of what Suryakant argues. This, however, does not answer the question that the flip side of theorizing this way by the postcolonial/subaltern scholarship undermines above all the aspirations of the subaltern themselves to move beyond their existing uncivil modes of existence, and in merely dignifying them, postcolonial scholarship becomes susceptible to reinstating oriental views of the subaltern in India. They also end up in strange ways reinforcing the way the subaltern is approached by the liberal ethos, exposing the moment where liberal ethos and the postcolonial ethos belong to the same ‘epistemic community‘. Part of the complexity is in the embedded multilayered character of caste itself. The best way could be to look for complex combinatory frames that can amalgamate these diverse yet interlinked dimensions of caste and civil society. While mere reinstating of a liberal frame remains an important part of this reality, it is but only one of the dimensions. This book, in a sense, does not affirm this, and argues instead for the liberal, contractual relations as having the capacity to capture the essential dynamics internal to the anti-caste movement.
The possible way out of this impasse is too complex an issue to be discussed here, though scholarship on caste needs to raise a range of new questions, in relation to the old. How the insidious and violent forms of exclusions of dalits has resulted in various strategies being combined together, and in that dalit movement has remained one of the most creative social forces. Along with this, the new scholarship also needs to open up the impact of this sustained violence on the political subjectivity of dalits, in articulating sub-caste conflicts within dalits. The move in the dalit politics from the ‘dalit panther‘ phase to the current phase of demanding institution of ‘dalit capitalism‘, moving from the project of forging ‘Bahujan Samaj‘ beyond the singularity of dalits to growing conflicts between dalits and the OBCs, and finally the success of the right-wing politics in mobilizing and giving a new subjectivity to dalithood. These are further issues that are linked to those issues that we raised initially in terms of the liberal and postcolonial frames. In fact, the former modes of approaching caste might have something to do with this new visible shift in dalit politics.