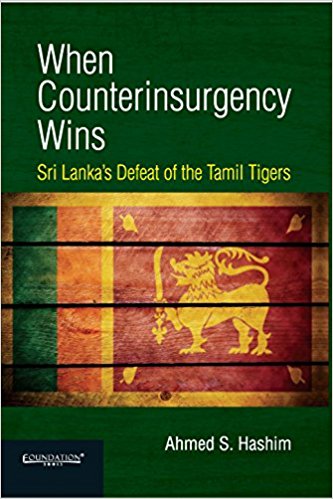 The author has impressive credentials. With a doctorate from MIT, he has taught at the US Naval War College and lectured at Harvard’s Kennedy School. He is currently Associate Professor at the Rajaratnam School of International Studies (RSIS), Nanyang Technological University, Singapore. The catch is that an American of Turkish-Egyptian origin, he served three terms advising the US command in Iraq after the fall of Saddam. His earlier book Insurgency and Counterinsurgency in Iraq carried his impression of that conflict. His service in Iraq perhaps explains the term ‘defeat’ in the title. To him, Sri Lanka’s ‘defeat’ of the LTTE is without a doubt ‘the first counter insurgency victory of the twenty-first century’ (p.2). This fixation with ‘victory’ and ‘defeat’ is a conceptual error that Americans have been guilty of across many conflict theatres. It can be be attributed to their strategic thinkers, such as the author; but then, the author’s interest itself can be attributed to socialization in the American school of war fighting.