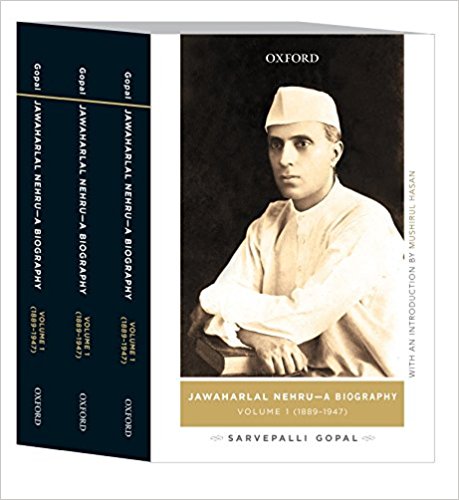 Biography, according to Lytton Strachey, is ‘the most delicate and humane of all the branches of the art of writing’. It is also a difficult art particularly when the story told is that of Jawaharlal Nehru, a man who strode the world like ‘a gentle colossus’ until very recently, and whose life was an open one, openly lived almost in ‘the glorious privacy of light’.  The task if further compounded by the fact that the character of the hero is a complex mixture of the dreamer and the fighter, the aesthete and the politician, the thinker and the activist, the reformer and the revolutionary and the conformist and the iconoclast—all contained within the trembling general equilibrium of a rounded and integrated personality.

It has been said that the biographer’s task is to reveal the real man lurking behind the well-known personality. The real Nehru, for all we know, is very much the familiar Nehru, and it is just as well that in this first volume of what promises to be a great trilogy on Nehru.

Dr. Gopal has not embarked upon a Freudian exploration into the origins of his hero’s psychological make-up, but has adopted the historical method of biography. In a sense the method was determined by the nature of the subject matter itself and by the fact that the author is himself an eminent historian. Nehru was a man of immense reticence, and as Dr. Gopal points out about the Autobiography, after 600 close-knit pages of it Jawaharlal’s ‘privacy remains unbroken’, a privacy which still remains unviolated even after the 400 pages of Dr. Gopal’s book.

Though the author has eschewed the unprofitable psychological approach, the book contains a series of brief but penetrating glimpses and analyses of the mind and character of Nehru and of the formative influences that fashioned his personality and outlook. Some would have us believe that Jawaharlal was primarily a product of English education. Nirad Chaudhuri, that brilliant literary knight-errant of the British Raj, has drawn a picture of Nehru as ‘an English volunteer who had taken up the cause of Indian independence’ and whose personality and ideas were fully formed when he returned from England in 1912. To claim great Indians mainly as the outcome of the British impact is a kind of wistful, residual colonialist-intellectual attitude very much in vogue in English literary circles .. Gandhi, who in his time was the arch anarchist and the half-naked fakir, is today for them a product of the Bible, Ruskin, Thoreau and Tolstoy rather than of the Upanishads, the Puranas and the Bhagwad Gita; and Nehru a Harrow and Cambridge boy and a Fabian fallen among the degenerate Indians and distracted to death by moral conflicts and dilemmas under an Eastern clime!

Dr. Gopal has stirred a hornet’s nest in England by challenging this plausible myth and entitling the chapter on Nehru’s seven-year spell in England as the ‘Unfor­mative Years’. He points out that in Cambridge the young Nehru was little attracted by Fabianism and, though enrolled as a student at the London School of Economics, he did not attend many lectures at that famous institution. As for the Labour Party, though he developed a warm friendship with Harold Laski, Stafford Cripps and Aneurin Bevan, he had looked upon the generality of Labour leadership as ‘sanctimo­nious and canting humbugs’. Of course, Nehru’s love for the English people, English literature and English institutions was a different matter.

The major formative influences on Nehru have been traced in this book to his involvement with the rural masses of Uttar Pradesh in the early twenties, his visit to Europe in 1926-27, and the relationship with Gandhi and his father Motilal. According to Gopal, the intimate contact with Indian peasantry gave ‘a new and permanent dimension to his outlook’. It not only ‘re-Indianized’ him but eventually converted ‘the pink and pretty young man’ into a lover of swa­deshi and a radical revolutionary.

The process was powerfully accelerated by his visit to Europe. ‘It was this spell in Europe’, writes Dr. Gopal, ‘and not the earlier years at Harrow and Cambridge, that was to provide Jawaharlal with his real political education.’ The Congress of the Anti­-Imperialist League at Brussels was a turning point in his intellectual development. It was at this Congress that he came to link India’s freedom movement with the wider anti-imperialist struggle in the world and to interpret Indian Independence in terms of economic and social emancipation of the peasants and the workers. The visit to the Soviet Union further reinforced this, but neither at Brussels nor at Moscow was the independence of his mind and judgement overcome by the enchantment of Marxist ideology.

The main substance of the biography is history, the history of the nationalist period as seen and enacted through Nehru. This basic portion of the book is remarkable for judicious selection. neat arrangement, masterly compression and sound interpretation of the overwhelming mass of material that is available. The two chapters entitled ‘Out of Tune with Congress’ and ‘War Crisis’ constitute particularly terse and elegant pieces of historical biographical writing. Incidentally, he has set the record straight with regard to the charge against Nehru that the latter was responsible for the creation of Pakistan by his rejection of the proposal for a coalition with the Muslim League in U.P. after the 1937 elections and by an erratic statement he made at Bombay after the visit of the British Cabinet Mission. ‘Pakistan’, says Gopal, ‘was not made inevitable by the statements of Jawaharlal. They, at the most, provided Jinnah with an opening.’ An opening, one might add, among several others like ‘the ill-timed tactics of Raja­gopalachari and Gandhi’, the one by making a propo­sal which conceded the substance of Pakistan and the other by treating Jinnah as an equal in negotiations. Of course the reasons for the creation of Pakistan were deeper than the tactical mistakes made by the leaders of the Congress, one of the most important reasons being British imperialist policy itself.

In the art of acquiring and exercising power, Jawa­harlal was an exquisitely subtle performer, all his openness and idealism notwithstanding. Dr. Gopal does not discuss this crucial question nor does he advance a power-political thesis, though much can be deduced from his narrative and analysis. Without being a Fabian, Nehru was an adept in Fabian tactics, in the Discovery he called it ‘the strategy of indirect­ness’. It was through this particular strategy that he brought the Congress eventually to the acceptance of the concepts of full independence. planning and demo­cratic socialism and internationalism. It is again in accordance with this strategy that, while being out of tune with the conservative leadership of the Congress, he worked and cooperated with it and reached the summit of power almost as a natural evolutionary process. Though an idealist, he was a realist and a man of compromise who knew that the receptivity of a people to an idea was not less important than the validity of the idea itself. Above all he was conscious that, in the Indian context, the way to the liberation of the country and the conquest of power did not lie in breaking with Gandhi and the Congress. The series of compromises in politics in which Jawaharlal was invol­ved, as on the Dominion Status issue in 1928 and on office acceptance and the Quit India resolution, have to be seen against this background. Dr. Gopal succinctly sums up this continuous rebellion and accommodation of Jawaharlal within the Congress as ‘a circumscribed revolt’.

Was Nehru a Marxist Socialist, a Fabian Socialist, an Utopian-Gandhian Socialist or a mere liberal democrat? And was he a man who was indecisive, imprecise and without a clear political mind of his own? Dr. Gopal is somewhat uncertain in his judge­ment on this subject. Nehru himself had always rejected the attempt to have him classified in doctri­naire terms. After all the universe of ideas has not been exhausted by the existing rigid political and ideological categorisations. There could be other ideas and other combinations of existing ideas to suit changing circumstances and times. At one place Dr. Gopal refers to Nehru speaking of India evolving her own methods and adjusting them to suit her traditions and conditions. One cannot avoid the conclusion that Nehru was really in search of an Indian way to socialism and democracy by evolving Indian ideas and methods and integrating in to them, in a creative manner, relevant ideas and methods developed in other countries. This is probably the reason for the tentativeness and the hesitancy underlying Nehru’s political philosophy and actions.

It is clear that Nehru was not one of those suscep­tible to be intoxicated by an ideology. He was essen­tially a sceptical rationalist with the irrational capacity of faith in the human being and in the betterment of man. He was that rare kind of a social democrat who, in the words of Aneurin Bevan, possesses the quality of ‘pursuing with passion qualified judge­ments’. The political philosophy of Nehru can be summed up in that one phrase—the pursuit of quali­fied judgements with passion.

This has given credence to the popular impression that Nehru was a romantic Hamlet-India’s ‘sweet prince’. In an eloquent passage, Dr. Gopal des­cribes Nehru as follows: ‘Estranged from his own people by being soaked in the exploiter’s culture, he was a mixed-up being, yearning for roots and strug­gling to work out his own destiny. Tortured by doubt, impressive in his indecision. agonizing over all sides of every question, always asking to what end was the long, wearying struggle, he provided the picture of a warm and vulnerable human being.’ To get a com­plete idea of the personality of Nehru this must be read together with the statement by Dr. Gopal that the moral and ethical values which Nehru had built around himself gave him serenity and strength. He used to carry a copy of the Gita with him, and once he advised his daughter: ‘All we can do is to face our job and do it as well as we can and remain as tranquil as we can in spite of shock and disaster.’ His was the philosophy of the Gita, with a strong element of modern sceptical rationalism added to it, rather than that of a Hamlet sicklied over with the pale cast of thought. Fundamentally Nehru was not a soliloquizing and procrastinating Hamlet, but Arjuna the warrior with the quality to doubt and to question.

It is essentially such a Nehru who emerges from the scholarly pages of Dr. Sarvepalli Gopal’s bio­graphy, written in lucid and crystalline style breaking occasionally into a fine flourish. Though the author began the book by saying that it was difficult to be objective about one who was the hero of his youth, he has managed to eschew deification altogether and has produced a biography that is both authentic and sympathetic. The price at £ 10/- is somewhat exaspe­rating. While one looks forward to the next two volumes of the biography, one also hopes for a less expensive Indian edition.

K.R. Narayanan a member of the Indian Foreign Service, is Nehru Fellow and Honorary Fellow, London School of Economics.