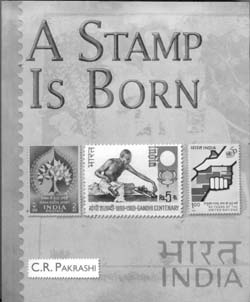 A beautifully illustrated book, A Stamp is Born, by Chitta Ranjan Pakrashi, describes in detail his journey as a stamp designer. Pakrashi ventured into stamp designing, a specialized genre of visual art, thanks to an All-India Stamp Designing Competition conducted in the year 1955. His entry was adjudged the winner of the first prize and his design eventually became the 2-anna Buddha Jayanti stamp issued by India’s postal department in the year 1956 to commemorate Lord Buddha’s 2500th birth anniversary. This uniquely designed stamp has the symbolic Bodhi tree, portrayed with special light and shade effects on a full moon night, the full moon too being symbolic to the Buddha.
Pakrashi’s stamp designing career has lasted more than fifty years. Pakrashi did a diploma in commercial art and a special course in industrial designing from the National Institute of Design (NID), Ahmedabad, and worked in the Government of India as an artist and industrial designer. And as a stamp designer Pakrashi has designed more than fifty stamps for India and a couple of foreign countries.

A Stamp is Born begins with a twenty-four page long Introduction by the author wherein he discusses the birth of the postal system, the birth of the postage stamp in the UK and the postal service in India. He also gives a detailed description of stamp designing, how he designed a stamp on the occasion of the national philatelic exhibition in 1982, INPEX 82, for which he had to depict a Railway Mail Service (RMS) van of earlier times. He had to visit different places like the Rail Bhavan, British Council Library, New Delhi and Old Delhi railway stations and Rail Museum to get a picture of such a van. And the 50 paisa stamp that he designed shows both an RMS van and the Fairy Queen engine, the oldest steam engine in the world in working condition.
What makes Pakrashi’s book interesting is that he describes both the great deal of research work that was often required in the evolution of the design and the art work he engaged in to design a stamp. The themes included make the book highly informative both for a lay reader and a researcher especially of history. The book has pictures of postage stamps, preliminary stamp designs, a part of the designing process, FDCs which he designed, postal cancellations, letters from dignitaries, autographed philatelic items and commercially used covers, all from the personal collection of the author.
Over the nineteen chapters of the book Pakrashi describes most of the stamps he has designed, year wise, offering interesting little anecdotes.
Pakrashi describes how he designed the 2-anna Buddha Jayanti stamp issued by India in 1956. Of the designing he notes: ‘The stylized Bodhi tree, Ajanta caves entrance shape, and Buddhist decorative motif were integrated into the design in a balanced composition. The inscriptions were also added to make the layout complete. As the stamp was to be printed in single colour photogravure process, the design had limitations. The design, therefore, was to display a monochromatic effect with intricate tonal variations to achieve the desired visual excellence.’
Describing designing of the stamp issued in the year 1968 to mark the opening of the 100,000th post office in the country, at Brahmpur-Chaurasta in Bihar the author explains why the postbox was chosen as the design: ‘The motto of Postal services in India aharnisham sevamahe (serving day and night) appeared to me as catchword of the theme.’ These words in fact do appear in the stamp.
Pakrashi also designed one of the four stamps brought out by India’s Department of Posts to commemorate the birth centenary of Mahatma Gandhi in 1969. The Rs 5 stamp that he designed shows Gandhiji at the charkha and the sun and the lotus representing truth and nonviolence respectively.
In the chapter on the Jai Bangla stamp that India issued in 1973, Pakrashi traces the history of the formation of Bangladesh. And the chapter also shows two First Day Covers (FDCs) released on the occasion of the issue of the stamp, one autographed by the then Indian Prime Minister Indira Gandhi and the other by Sheikh Mujibur Rehman, the then Bangladesh President.
In subsequent chapters the author explains the designing of the Homage to Martyrs stamps and the Gandhi and Nehru stamp both brought out in the year 1973 and then one of the three stamps designed by him to commemorate the centenary of the Universal Postal Union that was issued by India the following year.
Two foreign countries for which Pakrashi designed stamps for were Mauritius and Laos People’s Democratic Republic. The first was his design of one of the three stamps issued by Mauritius to mark the Second World Hindi Convention in the year 1976 and the second was the stamp for the birth centenary of Pandit Jawahar Lal Nehru in the year 1989.
Pakrashi has also designed stamps on India’s freedom fighters like Tatya Tope, Begum Hazrat Mahal, Nana Sahib and Mangal Pandey. And in designing a setenant of four stamps to mark the centenary of the Indian National Congress in 1985 he has portrayed several freedom fighters, for the stamps show sixty past presidents of the party, of course including the then President of the party and Prime Minister of India, Rajiv Gandhi, and the founder of the party, A.O. Hume.
Stamps on many other important personalities like Swami Vivekananda, JRD Tata, Shirdi Sai Baba and Ustad Bismillah Khan have also been designed by Pakrashi, besides those to commemorate significant events and occasions such as the centenary of telephone services, IXth Asian Games held in Delhi and the XIth Asian Games held in Beijing, the Golden Jubilee of the United Nations and national level philatelic exhibitions held in India.

N. Kalyani is a freelance environment journalist, writer and poet. A collection of her poems has been published as a book Mysteries & Musings (2011). As a philatelist her themes of interest are environment and wildlife.