Gatherings of the Palash Tree 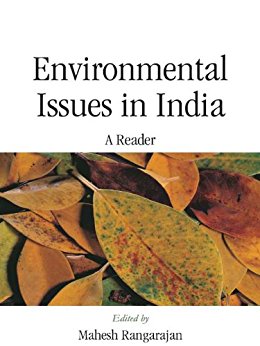 Whether ‘environmental science’ should at all be treated as a subject at the masters level in India may not be an issue entirely relevant to the present context, but Rangarajan’s book, the altogether engrossing reader on Environmental Issues in India, highlights both, the relevance of inter-disciplinary understanding of the issues relating to environment in the country and the importance of the regional and local context of such issues. The fact that he is one of the best documenters of environmental issues in the country, while others like him are also from the social sciences, and, that there are none such from the stream of environmental sciences, is a glaring indicator of the state of scientific intellectualism in the country.

Put together from papers presented at a workshop convened at the Department of History in Delhi University in 2005, this compilation presents work which has, in the most part, already been in print. There are three original papers written especially for the book, along with Rangarajan’s introductions to the different sections. The rest are selected with a view to assimilate insights from differing ecological pasts. As the editor states, knowing where we stand in relation to the land, a sense of geography is but the first step to making our histories.

Drawing a timeline through history, from pre-colonial times till today, Rangarajan meaningfully meanders, tracing environmental issues through India’s history, each of which has shaped our social and political history, and which in turn impacts the next set of environmental issues.

The book is divided into five sections starting with pre-colonial India. It then moves through the colonial period; independent India’s environment; the movements and larger issues of the late 20th centaury and, finally converges on issues of global importance as pertinent to present day India.

One of the most interesting and riveting aspects of this book is that each chapter is obviously relevant to our current situation; each talks about human reactions to situations, is brilliantly written—giving soul to the mundane, and yet, each is so different in context. Chapters range from the truly anecdotal to scientific analyses of contemporary issues. In Divyabhanusinh’s ‘The Great Mughals Go Hunting Lions’, along with understanding the great importance given by the Mughals to the statistics of their downed lions both as a matter of record and of pride, one also learns that Akbar gave his favourite wife, Nurjahan, a thousand ashrafis and a pair of pearl and diamond earrings for dispatching four lions with six shots. The Mughals, for all their romance and culture, almost decimated the animals from some regions in the country, following which the British tried their best to wipe out those left.

The importance of traditional systems of water harvesting over the centuries is highlighted in Mayank Kumar’s chapter on Rajasthan. Interestingly, in the present state development report for Uttarakhand being prepared by the Planning Commission recommends the revival and maintenance of traditional systems of water harvesting and storage in all areas. State by state and region by region, we are realizing the logic of time tested engineering and institutional structures. There may yet be hope. Similarly with fodder resources. Though Sumit Guha draws a picture of the political forces used to garner and horde fodder rich zones, the result of this history is that today in our rural areas, fodder is one of the biggest problems. Still collected from common lands and illegally from what is now forest land, fodder collection by the poorest is a constant, lifelong battle. Women in particular walk hundreds, over thousands of miles a year in their search for grass. In mountain regions, climbing trees overhung over ravines, in desperate greed for that last bunch of leaves, commonly results in the death of young women. Every village has a tale to tell. New twists to old programmes may help—state governments are ordering the development of central fodder storage facilities, in some regions the NREG programme is being linked to fodder production and storage activities, market interventions are also being developed and pushed. One can only hope that these efforts move in the right direction.

There are always doyens in history, those who pursued their passions intelligently and therefore, lead from the front. Rangarajan has chosen to highlight three Indians who have left a legible mark on our present day policies on the environment—Gandhi, Salim Ali, and Jim Corbett. Though there are many more who have lived and died for India’s environmental concerns, these three are probably the most well known, and well documented. Though Salim Ali’s pure, unfettered interest in birds had little initial links to the larger environment, he gave birth to a tradition in ornithology in the country, kept alive by the Bombay Natural History Society in its many programmes and research studies, as also now by WWF- India and the Coimbatore based Salim Ali Centre for Ornithology and Natural History. Over time, birds common in Ali’s days are now indicators of a degrading landscape, of pollution and lost watersheds. Corbett, similar to Ali, switched from being a hunter to a conservationist, and he, comprehended well the devastation wreaked by man on our natural environments. An unfailing conservationist, Corbett wrote vividly and extensively on his adventures and thoughts. Each of his writings has an underlying plea for the protection of the tiger and its environment. Unfortunately in his last days following India’s independence, he fled the country in fear for his life. Mahatma Gandhi, on the other hand, lived the life of the true ecologist in the most basic sense, believing that humans had no right to fulfil their greed, but only their needs.

Following independence, the immediate need was to feed the country. M.S. Swaminathan, the leading agronomist and prime architect of the green revolution is brought in at this point to introduce and expand on the subject of finite resources. He highlights the dilemma of the farmer, from whom we expect both—increased and cheaper food, and at the same time protected soils and less water usage. He urges a fallback to Gandhi’s swadeshi approach in farming, where integration and a multidisciplinary approach are required. In the same vein, McNeill states that the present, complex farming system which is energy and knowledge intensive, involving distant inputs and multiple social and economic linkages, is balanced on the edge, having replaced simpler, unilateral systems. And as if running on a wheel, mankind appears to have no option but to gear its social and political systems to perpetuate this monster. Greater complexity and ever greater vulnerability to disruption underpin modern life.

As part and parcel of this complexity we continue to ignore rapidly increasing degradation and loss. Continued attempts at the state and central level to generate sustainability seem to fail, as project after project dies out the day funding stops. Surveys of watershed projects reveal that increased productivity does not last more than two years, structures are abandoned because of lack of maintenance and common lands continue to be lost due to the lack of good institutions. Though in many cases the requisite needs are verbalized on paper, in practice, long term sustainability of projects is questionable. Saxena here voices what we all know intuitively, that integrated planning at the village level through people’s participation, and the linking of the future of forests and uncultivated lands with croplands and groundwater recharge will ensure the sustainability of the government’s efforts. Directly linked to this, Jodha’s classic paper on common property resources and the rural poor, first published over twenty years ago, emphasized by its clear writing style, remains one of the best reads on the subject today.

On to water issues. Mukul Sharma’s ‘Diara Diaries’ is written in my favourite style—conversational, descriptive and observational. Easy to read and easy to understand. The complicated ecosystem of the diaras and the worsening of the floods by dyke building is a mistake made again and again, from around the islands of the Sundarbans to the northern plains. Thakkar’s paper on community and public action, speaks for every issue in the country, though this one focuses on water pollution. First published in 1997, what builds a deep sense of worry is that what he says here remains as relevant today, and that there has been little change in the needs—the need to institutionalize the right to information and collective action, transparency in projects and programmes, decentralizing of the pollution control boards, and increased attention by research institutions.

There are many more chapters gathered under this canopy. On pastoralism, land policy, gender, displacement, wildlife conservation and disaster mitigation and then on movements against and alternatives to, existing problems. Madhav Gadgil and Ramachandra Guha’s 1995 publication on ecological conflicts and environmental movement in India gives the student an indepth view of nature based conflicts and ecological degradation. The paper starts with action sequences of the Narmada Andolan, moves into a study of the genesis and analysis of movements in the country at all levels, and ends with issues in First World and Third World environmentalism and highlights the inevitable tussle between the environmentalism of the poor and the rich.

Little has been forgotten in this book. The Taj gets its share of attention in Darryl de Monte’s ‘Monumental Folly’ and so do honey bees in Savyasaachi’s ‘The Tiger and the Honeybee’.

The book wraps up with a final section on ‘Environment and the Political Economy’ touching upon front page issues of today—industrial tragedies like Bhopal, the pros and cons of nuclear energy and global warming. Anand Patwardhan’s paper ‘Global Warming and India’ was first published in 2000. The intervening seven years have seen many new models, some major findings, implications and important policy decisions which could have been taken into account.

Butea frondosa, Latin for the Palash tree, flowers in the heat of summer. Its large, waxy, brilliant red flowers seem as patches of flame in otherwise dry, Indian green-brown forests. Its local name, the flame of the forest, is more than apt. Rangarajan highlights functional reasons for the tree’s existence: the flowers are ideal as a food and are used to make gulal. These are therefore gathered carefully by all those who know how to use them.

There is a dire need in the country today, of youth who understand that environmental issues make up more than water pollution, smog and global warming. The Indian environmental scientist has somehow managed to develop without a shred of Indian environmental history in his or her makeup. They look at problems in the here and now, without the intellectual maturity and breadth of accumulated experience from readings on past ecological experiences, presisting too with the belief that integrated approaches are the latest discovery rather than a result of centuries of growth and understanding, besides a lack of perspective of the importance of rural resources and economies: all this makes for a test tube approach to environmental problems and a lack of understanding of social communication and justice.

And a huge part played in their failure has been the syllabus of environmental studies, which lacked and in many places continues to lack, Indian history. I know because I was a first generation environmental scientist from one of India’s premier Universities. And we did not read environmental history.

This book is relevant for those interested in India’s ecological history, and for those working on socio-environmental issues who wish to find good documents under one cover. The referencing is extensive. Furthermore, being a compilation of relevant issues, books like this must become necessary reading for those hoping to become practising environmental scientists in India.

Malavika Chauhan, an Ecologist by training, is presently heading an organization, HIMMOTTHAN, working in the Central Himalayan regions of Uttarakhand and Himachal Pradesh.