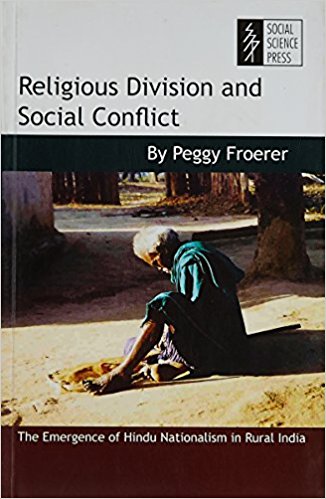 When on fieldwork in Jhabua district in Madhya Pradesh last winter, I was introduced to the local MLA, an extremely articulate RSS activist and ideologue. He was clearly the most dynamic of the local activists engaged in the Sarva Shiksha Abhiyan in the area and ran a boarding school at his own expense where poor girls and boys could both study and stay. As I was coming away from the meeting, he handed me a roughly printed flyer provocatively titled ‘Who are they?’I read it on the way back to the guest house at Jhabua. The refrain was: ‘Why do they not celebrate our Diwali? Why do they sacrifice our holy animal? Will they never learn?’ The ominous unstated ‘they’ was of course Muslims. Looking out of the window I saw that the town was deserted and on enquiring of my escort, found out that there was curfew because of a riot the day before. And the man I had admired only a while ago for his dedication to the cause of education was an agent provocateur! Was I was up against the fabled double face of the RSS, its pernicious communalism masked by social work?

It is this complex relationship between the particularity of the social reform agenda of the RSS and the wider national discourse of Hindutva that is explored by Froerer in this book. At the very outset the author makes it clear that her work is different from most other works on the subject which focus on ideology or high politics in that it seeks to bring out how Hindu communalism has penetrated the lives of ordinary people. While she distances herself from the historical and political approaches to the subject, she places her ethnographic study alongside the work of Jean-Klein on nationalist production in everyday life in Palestine during the Intifada or Billig’s work on banal nationalism, which examines the everyday aspects of nationalism.

Given that some of us became sanguine that the danger from Hindu communal forces had passed since the electoral defeat of the Bharatiya Janata Party led NDA government at the national level, Froerer rightly reminds us that the real danger lies in the inroads such forces have made at the grassroots level. While overt attacks on Christian missionaries continue to grab media space and keep the spotlight focused on Hindu communal groups, the more long lasting threat is the way in which these groups have insinuated themselves into the daily lives of the tribal people. Whether it is health care or liquor disputes or conflicts over land, the interventions of RSS activists strengthens their position as local leaders. This suits interests of the RSS as it needs to move beyond its traditional support base organizationally and translate this into electoral victories.

And yet, this ethnographic study, based on the field-work by the author in Mohanpur in Korba district of Chhatisgarh between 1997 and 1999 does not limit itself to the local. It unravels the manner in which these local articulations of communal politics are interwoven with the broader discourses at the national level. For instance, local disputes over liquor and land are linked with the discourse of ‘one nation, one culture’.

Another important aspect which differentiates this book from other books on Hindutva is that Froerer’s focus is not on the predominant anti-Muslim posture of Hindu communal groups but on their antipathy to Christianity, a facet which gathered momentum from the mid 1990s. The brutal murder of Graham Staines and his children in Orissa when this charismatic missionary’s jeep was set on fire was the heinous face of this. The opposition of the RSS to conversion is well-known, the author reminds us that conversion was opposed even by Verrier Elwin, who is generally accepted as a champion of tribals but whom she sees as an ecological romanticist. The RSS is only appropriating his rather dubious legacy in this regard. Various methods are used to bring the adivasis into the Hindu mainstream, including ghar wapsi (homecoming), shuddhi (purification), and getting the adivasis to give up their backward ‘jangli’ rituals and adopt the correct practice of the shahri Hindu. A very important point made by Froerer is about similarities in the attitude of the RSS and the Church towards adivasis. Its methods draw on historical practices of the Church which has ‘diabolized’ adivasi practice. The Church imposed fines on adivasi Christians who continue to practise adivasi customs, they are treated as outcastes and their children are expelled from schools. Missionaries used medicine as a proselytizing tool in their ‘uplift’ and ‘civilizing’ mission. The provision by the RSS of improved access to biomedical treatment is modelled after successful church initiatives. Now the village has a RSS doctor who attracts adivasis away from the dispensary run by the Church.

The chapter, ‘Local Corruption and the Politics of Inclusion’ recounts in fascinating detail how the RSS contests the authority of corrupt local power holders, much as the Church did earlier. The instance taken up is that of the Patel of Mohanpur, who, as a munshi in charge of tendu leaf collection, had earned over ten thousand rupees in the last season. Though the blow to the authority of the Patel came in the form of a traditional challenge, in this case an order by Kaleshar, a powerful, local, tribal deity, the author demonstrates how divine authorization was implemented by the RSS. The danger for the future was that a non-state actor and one that did not hesitate to use violence had set a precedent for intervention.

The chapter on Land Relations and Local Tensions explores the resentment of the original settlers, the Ratiya Kanwars, towards the newcomers, the Oraon Christians, who had prospered because of their hard work and enterprise. Liquor sale by Christians became another point of conflict as it was taken up by the RSS to show that Christians threatened the harmony of the Hindu family. In doing so, it subsumed the adivasis into the greater Hindu community, indeed, into the Hindu nation.

Sketches of the layout of village, tables of caste-wise breakup of villagers and land-holdings, photographs of religious and cultural practices and a useful glossary, augment the text albeit with some imprecise translation. For example, untouchable should be achhut not chhua chut which is the practice of dis-crimination; anganwadi should not be nursery school teacher, but nursery or pre-school.

Sucheta Mahajan Professor, Centre for Historical Studies, Jawaharlal Nehru University, New Delhi, having earlier worked on historical dimensions of communalism (Independence and Partition: Erosion of Colonial Power in India, Sage, 2000), is presently engaged with more recent manifestations of the problem, especially communalization of tribals by Hindu communal groups, all in the name of mainstreaming the marginal.