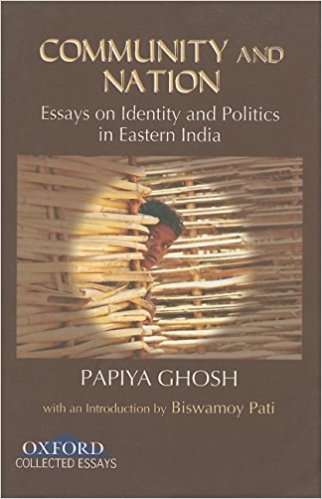 Community and Nation consist of ten seminal essays written by Papiya Ghosh who is sadly no more with us.* Thus this review is a tribute to a distinguished scholar. Written in the course of her post-doctoral research, they have been competently put together with an introduction by Biswamoy Pati. The essays have already been published in reputed journals. However, putting them together has value as they provide a historical narrative of the gradual construction of a ‘Muslim identity’ under colonialism, changes due to partition and creation of Bangladesh and the subsequent worldview of the Muslim diaspora in the western world. The theoretical core of the book is the complex relationship between ‘community’ and ‘nation’ in the specific context of the ‘Otherising’ (p. x) or making of a Bihari Muslim identity in the colonial period leading to partition of the subcontinent. The first six chapters deal with various aspects of Muslim identity shaped during the colonial period; while the remaining four describe the exodus of Bihari Muslims in the post-partition riots.

Ghosh’s research admirably shows how partition anticipated many of the questions raised across the subcontinent today: ethnicity, communalism, religious fundamentalism and cultural nationalism.

Critical of researchers who construct a ‘Muslim identity’ solely around Islam, based on ‘Mongol-Mughal’ ideas of the 16th and 17th centuries, which it is asserted had not been eroded by the 1920s. Ghosh forcefully argues that regional rather than religious categories had over a long period shaped the identity of Muslims in Bihar until the later 19th and 20th centuries when reformist orthodoxy and political communalism introduced change. Moreover, when questions were raised ‘who is a Muslim’ and what constitutes ‘Muslim identity’ there was no one set of Muslim assumptions of Muslimness irrespective of the specificities of class, region and ideology. The Deoband and the Aligarh trends took opposite stands towards the national movement. The Jamiyat al ulama i Hind and the Momin Conference in 1919 subscribed to a theory of composite nationalism in which Indian Muslims though separate from others in religion were ‘fellow-nationals’; they were not a nation, but were a millat that could co-exist with other religious communities as part of a confederation of religious communities. This view was in keeping with the lived experience of the people, but was not shared by the Muslim League, though its influence was not as great in Bihar initially as elsewhere.

Ghosh traces the hardening of relationships between 1917 and 1923 among Hindus and Muslims to the Shahabad riots of 1917 as they surpassed all previous riots, took time to quell, spread over large tracts and came to provide a ‘reference point’ in Hindu Muslim relations. She agrees that the twin issues of cow protection and qurbani led to worsening of relationships between the two communities, but her research points to different reactions and many attempts at reconcilliation by leaders which shows that even in 1920 it was still possible to bridge divides and prevent confrontation. In August 1921 Gandhi, Muhammad Ali and Azad Subhani together toured Shahabad, Gaya, Bihar Sharif and Patna addressed many meetings that defused tension. Rajendra Prasa and Abul Kalam Azad were deputed to meet religious leaders and address meetings and defuse tensions. But at the same time, in the 1920s it became increasingly difficult to disentangle religion, community and political activism as events elsewhere impacted upon Bihar: Shuddhi by Swami Shraddhanand, conversion of Hindus in the Malabar and the Multan riots. The leaders of organized politics saw themselves and were widely perceived as serving country and community, swaraj and shariat, and swaraj, shuddhi and sanghathan in whichever order they appeared in tandem. The contestations were whether these should remain part of the terrain on which nation building was being undertaken. Virility and chastity were also put forward as correlates of shuddhi and sangathan. This discourse based on patriarchy focused on women as signifiers of community and therefore a site for contestation against the other, namely the aggressive proselytizing Muslim.

Ghosh’s research indicates that it was during the period of the Congress Ministry in the 1930s, that the Muslim League was successful in creating the negative ‘Congress Muslim stereotype’. The Shahabad riots had created suspicions among Bihari Muslims and questions began to be raised in public meetings about how representative the Congress Muslims were and even fears that Home Rule supported by them could lead to the need to migrate to ‘some other country’. But Ghosh argues that it is important to recognize that ‘only in Bihar’ this view of the Congress was halted due to the work of some local leaders. But it was only for a while; by 1928 the Nehru Report was condemned as favouring the Hindu Mahasabha and Congress Muslims as renegades; the civil disobedience movement saw little Muslim participation due to the Bihar Muslim League opposing Muslim participation and Congressmen making little sustained efforts at mobilizing. However, Ghosh argues that to say that the two communities had become totally estranged was exaggerated.

A signal contribution of the historical narrative is that it shows that there is no one homogenous Muslim identity or politics, but many that operated simultaneously to create a more complex story than is usually told. The process by which crystallization of identities took place is examined through rich details of local politics that are lost in most studies on national or state politics. Another contribution is the critique of the role of the Congress in the building of different identities not only that of the Hindu Mahasabha which historians have recognized. While on the one hand Congressmen did work for Hindu-Muslim unity, Ghosh shows that they failed to confront communalism and were members of the Hindu Mahasabha also, which destroyed their credibility.

While much has been written about partition, Ghosh examines a closely related question over three chapters—the displacements caused by it to a very large number. About 60,000 Muslims moved to Bengal and then to Dhaka shaping the contours of the city, though some came back later. While the Congress held that the Muslim League gave highly exaggerated figures, even Nehru was forced to agree that the numbers were large. Ghosh shows that the role played by the Hindu Mahasabha, which painted the League as unpatriotic, added to the tension of the period. At the same time she agrees that the riots had links with Congress leaders at the state and local level, some of whom admitted their role to Gandhi. The riots of 1946 saw the final crystallization of communal identities among both Hindus and Muslims. East Pakistan came to be seen as the embodiment of the sacrifice of Bihar Muslims in the riots of 1946.

Partition created an Islamic identity separated from class, regional and linguistic specificities. But Ghosh holds that earlier imprinted memories remained strong and shaped the Muslim community, both among those who remained and those who went to East Pakistan. While there has been a rise in Urdu speakers, older languages such as Maithili and Bhojpuri have not been given up; Muslims have been at the forefront to demand Backward status and some like the Momins have demanded inclusion in the list of SC/ST. Ghosh also describes ‘stranded Pakistanis’ or Mujahirs in present-day Bangladesh who have been living in refugee camps awaiting repatriation to Pakistan. Thus, neither partition nor the identities it created were neat.

Finally, Ghosh examines the post-partition Muslim diaspora consisting of Indian/Pakistani Muslims who have migrated to the UK, US and Middle East. Examining the activities of various organizations such as the MQM and ULMA, she argues that this disapora is not ‘a single phenomenon’ and post-modernists are wrong in arguing that the era of the nation-state is over for such persons. Rather an analysis of these organizations suggests that South Asians in the UK, US and Canada remain Indians, Pakistanis, Nepalis, and Bangladeshis and follow political developments back ‘home’ such as Hindutva or dalit politics. They are products of strong nationalisms and are not willing to become ‘white’ or ‘black’. Yet at the same time, Ghosh points to further complexities of identity as the three year old Pakistan-India Peoples’ Movement for Peace and Democracy is trying to link up with the diaspora of these countries in a quest to overcome the 1947 divide of nation-states.