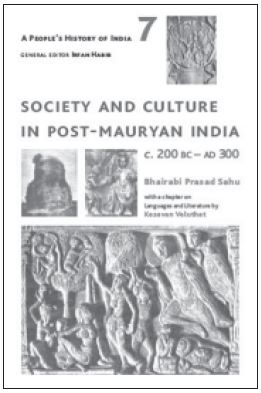 Bhairabi Prasad Sahu’s book on society and culture in Post-Mauryan India   is a companion volume to Volume 6 which deals with the political and economic history of the same period. The five centuries intervening between the two pan-North Indian empires, the Mauryas and the Guptas, usually known as the ‘post-Maurya period’, is a significant period in early Indian history. It can very well be considered a formative period of early Indian society and culture. This period had witnessed the infiltration of various Central Asian tribes into the subcontinent, including the ‹akas, the Indo-Greeks, the Parthians and the Kushanas, bringing an unprecedented range of political and cultural churning. It was also the heyday of the lucrative trade network extending to China on one hand and the western Roman Empire on the other. Buddhism and Jainism had received immense patronage from these newcomers, and witnessed the zenith of their theology, art and literature. Much of the Buddhist canon took shape in this period, while the rise of Mahåyåna Buddhism also took place