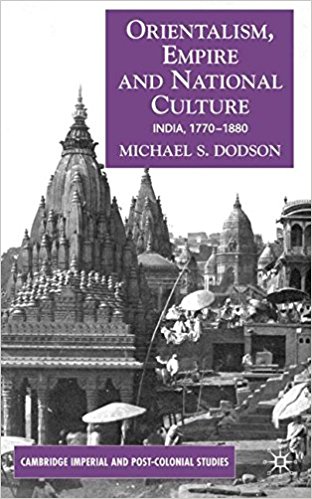 The West’s gaze of the East is being looked upon with some suspicion in recent years, especially where there have also been relations of power between the observer and the observed. Michael Dodson’s book lays bare the complexity of the ‘persistent truths’ of Orientalism, its ideological underpinnings and its modus operandi and shows that while all the debate starting from Edward Said or even earlier is not entirely out of place, there is much more to it than a conspiratorial scheme to produce knowledge about the colony as a means of controlling it. It suggests that the intellectual history of early modern India, which was responsible for articulating a national culture of the country, cannot be understood without reference to the activities of pedagogy and the role of Sanskrit studies in it. In fact, it forges a closer link between intellectual and social-political history. Orientalism was not only directed at the construction of authority on European terms, but it also involved deploying a series of strategies to co-opt and adapt elements of the social, cultural and political authority in India, both traditional and as established in recent times. Such authority was, however, a process rather than a product.

Dodson shows how knowledge of Sanskrit was used as an instrument of colonial control, a tool of Orientalism not only for glorifying India’s past but also as an icon for the scientific future of the country. In this book, which examines the complex relationships between knowledge, colonial institutions and the forms of social, cultural and political authority in north India, the author also interrogates knowledge as a form of social and cultural capital. The immense work of the Benares College and James Ballantyne in particular is documented and taken up for detailed analysis. The pandits cease to be passive informants, teaching the sahebs what they wanted, but emerge in bolder contours. They have an agency of their own; and they produce knowledge which manipulated the course of the Orientalist projects. This cultivation of Sanskrit in the early modern period—not merely a revival of interest in the classical but an enthusiasm for it as a vehicle for the modern as well—also resulted in creating what C.A. Baily calls an ‘elite classicism’ and led to the cultivation of what came to be known as Shuddh Hindi with increased use of Sanskrit words in preference to Arabic, Persian and Urdu words in the ‘Hindustani’ that was prevalent in northern India in general.