Colonial Encounters and the History of Hijra Survival 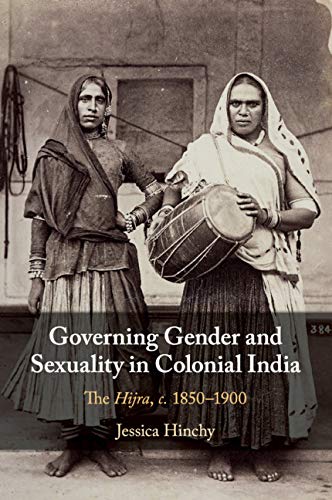 In writing Governing Gender and Sexuality in Colonial India, Jessica Hinchy has given the world of gender and sexuality studies a much required in-depth history of the Hijra community. Based on years of her archival research published as independent papers in different journals, this book is also the story of encounters with violence, resistance, and resilience. Hidden behind the detailed academic analysis is the tale of survival of a community whose non-normativity and visibility made it a target of colonial control, surveillance, discrimination and even extermination. The significance of Hinchy’s work lies in unearthing the hitherto under-studied colonial Hijra archive and more significant conclusions that she draws towards an understanding of sexual regulation.

Opening the book with a discussion of a Hijra named Bhoorah and her murder in 1852 in a north Indian district, Hinchy sets the tone for what can qualify as a provincial study. With a primary focus on the North-Western Provinces where Bhoorah lived, the book is divided into three parts viz. ‘Solving the “Eunuch Problem”’, ‘Multiple Narratives of Hijra-hood’ and  ‘Surviving Criminalization and Elimination’ that span over nine chapters. Questions such as why the Hijra community’s management became a necessary task for the colonial government, how the community was depicted in European accounts, and what led to the materialization of the Hijra panic amongst British officials of North India are addressed in Part 1 of the book. Here, Hinchy examines the British commentators’ use of metaphors of dirt and contamination for Hijras. This in addition to their categorization as ‘habitual sodomites’ offers an insight into the Hijra community’s problematic relationship with the colonial social order that viewed them as an ungovernable population. What is fascinating is how Hinchy highlights the spatial aspect of ‘the eunuch problem’ by focusing on the role that mobility of Hijras for alms-collection played in their branding as criminals and for holding them responsible for spreading sodomy, resulting in moral panic.