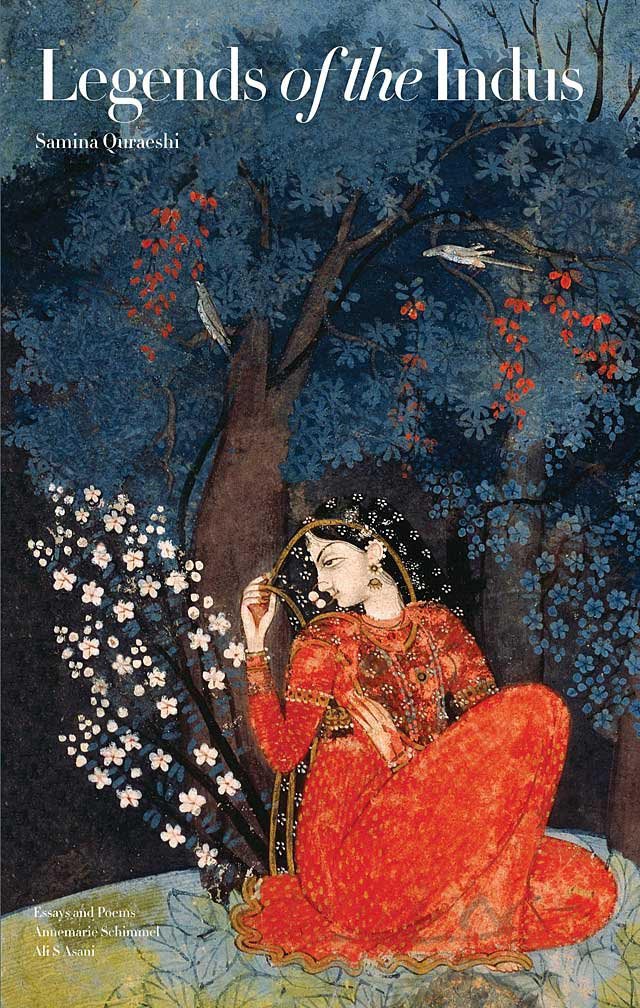 Opening this book is like flying on a magic carpet across fabled lands and landscapes. It is a compilation of five legends drawn from the main regions of the Indus Valley, spanning the Himalayas to the desert sands of the Arabian Sea, in what is now Pakistan, encompassing Khyber, Pakhtunkwa, Punjab, Baluchistan, and Sindh, embracing a plural culture.

The format of the book itself is an exercise in aesthetics. There is a preface by the author’s daughter, Sadia Shepard, and an evocative prologue by the author, essays by Annemarie Schimmel, the author’s mentor, and Professor Ali S. Asani, one of the leading experts on Islamic literature and mysticism, whose research focuses on Shia and Sunni devotional traditions in the region. This is followed by an in-depth introduction by the author. The five legends are interspersed with Sufi poems by Annemarie Schimmel, and illustrated by paintings from the Lahore Museum.

What makes this book different is the Sufi mystical interpretation of time-honoured legends and stories—the concept of the soul’s re-unification with the divine. As Annemarie Schimmel puts it, ‘It is the story of the soul who never forgets her primordial home in God.’ This idea is reinforced by Professor Ali S. Asani, who speaks of the ‘mystical allegory within the frame-work of Islamic mysticism, depicting various stages of transformation of the ego until finally, through yearning, the self becomes one with the Divine Beloved.’ It is a telling commentary that poets like Waris Shah, and Bulleh Shah created mystical epics based on folk-legends.

In her introduction, the author writes evocatively about the tapestry of the Indus Valley culture being woven from the experiences of diverse peoples who have lived here, long before recorded history.

Each of the five legends in this collection is preceded by an in-depth introduction about the history and geography of the region, which lends depth and perspective to the stories.

Some of the legends are better known than others, but all five stories are about star-crossed lovers. The story of Adam Durkhane is showcased against the backdrop of the Swat valley, and is fine-tuned to the haunting echoes of the Himalayas. It tells the story of Adam Khan, son of a Malik of the Yusufzai tribe, named Hassan Khan, who was the pride of his father. Understandably, the father wanted his son to inherit his position as chieftain of his tribe, and trained him appropriately, but Adam was more interested in the finer things of life, like music and poetry, than warfare, and preferred his lute to his musket. However, being a dutiful he fulfills his responsibilities, and wins a crucial contest, for the prestige of Hasan Khan was at stake, he defeats Meermai, the bandit chief.

The legend is the doomed love story of Adam Khan and the ravishingly beautiful Durkhane, daughter of the richest man in town. Married to her fiancé and living in his opulent mansion Durkhane yearns for Adam Khan, as he does for her. Adam Khan seeks the help of the bandit Meermai who rides with his men to Durkhane’s marital home one dark, moonless night, and carries her off. Adam Khan goes to the bandit chief’s fortress to claim his love, but Meermai tells him that Durkhane’s husband had paid a heavy ransom, and taken his bride away. Adam Khan realizes that Meermai was exacting his revenge for being defeated in the duel. He rides away in despair till he reaches the highest peak of the Hindu Kush, calls out Durkhane’s name with all the agony of his grief, and her name echoes back to him, and he ‘let himself slide into the sound, and slipped into death’s embrace—descending through the haunting sound to the rocks below.’

The legend of Heer and Ranjha, another pair of star-crossed lovers, set in the Punjab, tells the story of Heer, who was married to Saida Khan, a young farmer. One day, a beggar visits her marital home, and on seeing him, she faints, for she recognizes him as a flautist who had bewitched her with his music in her maiden-days, when she used to spend her afternoons on the banks of the Chenab, the biggest tributary of the Indus, with her friends.

Heer confides her past to her sister-in-law Sehti who is in love with a man belonging to a different religion. The two girls plot a way to join their lovers. While Sehti is successful in escaping with her lover, Heer is not so lucky. Accused of adultery she is forced to return to her parental home, on the advice of the governor. Her father advises Ranjha to come with a proper proposal for Heer. When Ranjha comes with the baaraat to take Heer with him, a jealous companion poisons Heer, and the heart-broken Ranjha consumes poison himself, so as to join his beloved in death.

In the legend of Sohni Mahiwal also from the Punjab, the star-crossed lovers are separated by a river, and Sohni crosses the river in a hard-baked clay urn to reach her beloved paddling with her hands and feet. One night, her sister-in-law, who is jealous of her, spies on her, and determined to take revenge, substitutes an unbaked clay urn, which begins to dissolve while Sohni is half-way across the river. Sohni call out to Mahiwal for help, and he tries to save her, but the elements are too strong for him, and he too drowns, clinging to Sohni’s dead body, and the lovers, cruelly separated in life, are united in death.

Shah Abdul Latif was the Homer of the Sind, and he skillfully uses the legends and stories as metaphors for his Sufi teachings. His interpretation of the legend of Sassui Panhun, yet another pair of star-crossed lovers is mystical. In brief, Panhun is abducted by his family while the couple lies in intoxicated sleep, and on waking, Sassui, bereft at the absence of her beloved, sets out on a fatal pursuit of her husband across the desert and mountains. In Shah Abdul Latif’s hands, this romance becomes a parable of the seeker on a mystical path who undergoes many trials and tribulations in the quest for God. Sassui symbolizes the soul, which loses contact with the vision of the Divine, because of her indolence.

The book is a collector’s item, for more reasons than one—its glossy paper, colour-plates, in-depth interpretation of the legends, evocative language and universal appeal, to mention a few. Its publication is most timely, at a time when the world is being broken into narrow fragments, and serves to show that human emotions and aspirations know no barriers, no borders.

Indu Mallah, a writer, poet, literary critic, and social activist living in Ooty, is the author of Shadows in Dream-time, a novel. Some years ago, a cross-section of her writings was showcased on a BBC website on S. Asian women writers.