City on the Plain 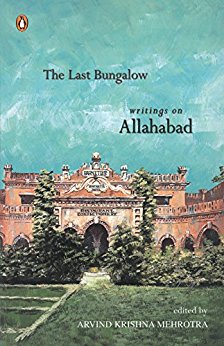 We Allahabadis grew up carrying our own mythology in which fact, innocence and provincial arrogance mingled in equal proportions. But let me get to the facts. The city of Allahabad, a dot on the map like a mustard seed placed exactly where the spidery, hairline-blue veins of two big rivers meet, was not just another nondescript settlement in the great Indian outback. It was a prominent administrative hub during the Raj, with a high-profile cultural identity all its own. It is to this once-great centre of high learning, activism and literary output that The Last Bungalow: Writings on Allahabad, edited by Arvind Krishna Mehrotra, is dedicated. An intermesh of Hindu, Islamic and British influences, Allahabad supplied a battery of civil servants, jurists, politicians, writers, scientists and academics to India’s cutting-edge history-makers. Reading through an account of an average day in the autobiographical anecdotage about the city is like walking through a gallery of India’s Who’s Who not so very long ago.

It has been an immense pleasure reading this collection of writings about the city, to revisit bungalows, streets, parks, fairgrounds and bridges highlighted by Hsiuan Tsang’s voice-over, or Ralph Fitch’s quaint Elizabethan locutions, or Fanny Parkes’s lively nineteenth century outpourings or Bhola Nath Chunder’s Victorian jottings or Kipling’s perky confidences or Mark Twain’s intrigued observations. The city’s felt presence comes alive in a sweeping experience of historic sharing that is exciting to a twenty-four carat Allahabadi like me. History unrolls before the eye in a collage of curious pictures that have not been sighted before—sadhu acrobats balanced, like doors on hinges, on poles stuck in the waters of the Ganga; pilgrims leaping to their deaths; nineteenth century Ramlilas in which the child actors who played Hindu gods were given poisoned sweets so as to achieve immortality in godhead. And then 1857, the slaughter of British settlers, the survivors seeking sanctuary in the Fort and the days of the Terror, Indian soldiers of the 6th Regiment Native Infantry rampaging about, killing, robbing, burning. And the retaliation by Neill’s forces in which the victorious British wrought a terrible vengeance on the local population and bodies swung from improvized gallows at every crossroads.

Then villages were razed to the ground and a tranquil, colonial garden-city laid out. Every student of colonial history is familiar with the Declaration of Allahabad, read out by Lord Canning on behalf of Queen Victoria, those ‘jewel-in-our-crown’ lines that seem, even in the utterance, to be carved in buff-coloured stone. Allahabad, hitherto a famous pilgrim centre, became the capital of the North West Provinces by reason of its strategic position—a fact the Mughals had realized much earlier. Later came the Indian National Movement and as one reads the diary jottings, letters and chapters out of memoirs, other pictures assemble in the reader’s mind—Tilak’s ashes arriving for immersion in the sangam, Gandhi’s call for noncooperation, the dominant family presence of the Nehrus, the comings and goings of national leaders. An old teacher of mine used to say that until 1947 students used to move around with autograph albums in their pockets because the city was full of celebrities and you never knew whom you would suddenly run into.  Alongside all this there was the subtly choreographed ceremony of empire, a round of garden parties, dances, plays, tennis tournaments, church socials. And in the Indian literary space the roll-call of names of Hindi and Urdu writers is staggering. It is not to be wondered that there is a generation of us who are so partial to this heady Raj  cocktail of Brit-Islamic-Hindu so that we are still not sure whose side we are on.

However, there’s an implicit then-and-now binary at work in a volume of this nature. The introduction asserts that Allahabad’s hour is over and that it’s a dust-to-dust fate that has overtaken this city, blighted by decay, mafia-turned-property developers, a rustification and boorish vulgarity and a decline of its once famous educational institutions. All that stylish literary life, that upper-crust political activism, that rigorous discipline, classy grace and high-minded motivation is over and it hurts. It is a fate that has confronted failing civilizations before and purists have lamented losses in quite the same vein. As the bulldozers go to work at the bungalows and Avondale turns into Lotus Apartments, that endangered specie, the vintage Allahabad intellectual, still goes on defining culture within the parameters of which he himself is a product. Forgetting that the life of a city, any city, is larger than the social rhythms followed by its privileged class. When the hoi polloi come into their own and the plebs overrun White Town there is cause for concern because the blighters now think they’re the toffs and won’t be cowed down by the dated Oxbridge voice and all your patrician sneers are lost on them because the rules have changed and the old snobocracy has collapsed. Memorials to lost worlds are part of this deal, romancing the past too. A telling detail in so many of these inputs is the recurrent obsession with servants. Servitude seems a category of racial connection here. From Fanny Parkes’s long list of bhishti, masalchi, bawarchi, dhobi. durzee, bearer, aabdar etc. to Mark Twain’s troubled conscience at the sight of servility, to the brown sahib, Sudhir Kumar Rudra, to the railway colony Anglo missy-baba, the attitude to the native servant is one of mistrust, patronage, helpless dependence and yes, apprehension. I wonder if it is a hangover of the same apprehension that dogs us when we regard the bumptious Black Townwallahs, we who ourselves occupied the outhouses of the empire? Still, the old Allahabadi is a divided soul and our nostalgia for the remembered niceties is an authentic longing too. And Mehrotra’s volume appeases our  rancorous, finicky souls.

Still, I would like to take issue with the book’s implication that Allahabad is a dying city. Beneath the surface something strange and unprecedented is happening in Indian history and embattled, bruised and mouldering Allahabad is witnessing it as we undergo various necessary phases of anarchy in our self education in mutating democracy—something the old profs in the grand old colonial university here could not have got out of books in the old days. A kind of culture has indeed crumbled to dust but it is not just the dust of destroyed edifices but equally the dust raised by the onward march of history. Mehrotra’s meticulous researchwork and the contributions of people like Kama Maclean and Kate Chisholm have put together a piece of historical reconstruction at par with the sort done by Diana Eck, Rosy Llewelyn-Jones and Violette Graff. His clean, spare, pared-down prose is a window so polished that the glass does not seem to exist and the sentences as they come have such an inevitability of rightness that they could not be anything but what they are. But we might have been spared all those pages about callow adolescent love life in Mehrotra’s own piece and in that of one or two others, details which have specifically little to do with the city of Allahabad and mark a slight fall in pitch in this otherwise valuable work.

Neelum Saran Gour is a fiction writer and Professor of English Literature at Allahabad University.