A Star from the Backwaters 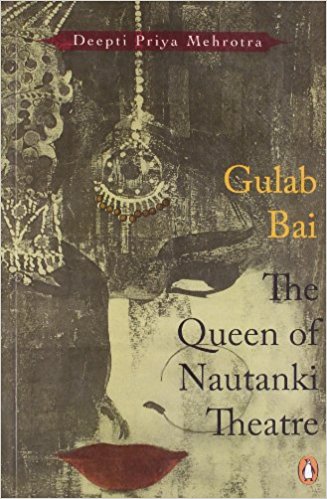 One of my earliest aural memories is of listening to the mesmerizing sounds of traditional north Indian music, from an old phonograph in the vast Baithaki in my grandmother’s house. Next to this magical instrument sat a black leather box containing a prized collection of His Master’s Voice records. Among the noted singers who had cut these discs, was one Gulab Bai. Her Dadra … ‘Nadi naarey na jao Shyam’…sung in a husky, alluring and somewhat nasal voice had made her famous. At the mention of her name though, the elders wrinkled their noses, ‘oh that Gulab Bai? She is a Nautanki Wali Bai from Kanpur’. The phenomenon of the Nautankiwali Bai in India has suffered greatly from such faulty culture bound evaluations. But in this unputdownable biography of Gulab Bai, the author, Deepti Priya Mehrotra does not aim at judging these previous evaluations, nor does she claim that what she has culled out from her own field studies and theatre lore, is nothing but the truth:

In telling the story of Gulab and the story of Nautanki, it will be difficult—often impossible—to demarcate fact from fiction. Gulab Bai left no written records. The truth may lie somewhere in the interstices of the various versions as I recorded a vanished past, we may perhaps salvage something. Deepti Priya has managed to salvage rather a lot with her painstaking research during the course of which she visited Gulab Bai’s natal village as also her later residence in Kanpur, met up with her family, her colleagues and various admirers of Nautanki and Gulab Bai, both as an artist and the woman she was.

Nautanki as a musical art form, reigned as one of north India’s most popular forms of theatre for nearly a century. Gulab, a twelve year old girl from the Bedia community, joined it in 1931 and rose to be one of its brightest stars. Later she created her own Company and became one of the most successful Company owners in a completely male dominated field. She was decorated many times, awarded the Padma Shree by the Government of India and feted by the high and mighty in Delhi, yet towards the end of her days she was increasingly alarmed by the fragile nature of professional integrity and monetary success in the traditional theatre she had worshipped. Her personal success notwithstanding, she was unable to save Nautanki from being swallowed by urban theatre and, of course, the cinema.

The Bedias in north India are a sub branch of the dalit community, referred to in traditional texts jeeringly as Jaaya Jivya and Roop Jivya, meaning those that live off the earnings of their beautiful women. Bedias claim that they have descended from Maharana Pratap’s soldiers in the 16th century. And like the legendary Maharana, they had taken a vow to lead nomadic lives till their motherland was freed. Bedias, like the Nats and Kalbelias have a long tradtion of dance and music. Their women performed in villages they passed through and this earned them a meager living. The Bedia men were feared as fighters and bandits and were labelled as a criminal tribe and much persecuted by the British. This ironically set their women free from the kind of male dominance caste women had to face, and gave them a rare independence both of the physical and financial kind. Gulab had children, though she never married, but, as her daughters complain in the book, she was occasionally exploited by her father and brothers, all of whom were by and large charming scoundrels who loved their drink. Like most Bedia girls, Gulab, though denied an education and pushed into becoming a breadwinner at twelve, remained fiercely loyal to her family right to the end. She had great faith in Phoolmati Maiyya, a demi goddess all tribal artists, including the Bedias worshipped. Gulab claimed that her talent was given her by the Maiyya, and her faith in the goddess was unshaken till the end. As she aged, Gulab, instead of fighting age, began grooming her sister Sukhbadan to replace her in romantic roles and later her daughters, Asha and Madhu. She was by now mostly handling managerial chores, selecting and grooming talent for her Company and taking care of resources. In this she was cheated more than once by men she trusted.

Gulab by now lived a middle-class life, but while this elevated her status somewhat, it also added to her family responsibilities and often made her anxious and tense. Dowry demands, bad marriages by the daughters, constant demands for money from her son and the needs of her Great Gulab Theatre Company, gave her little peace, but this did not break her spirit. She remained composed and dignified till the end. One of her last photographs shows a well rounded face with piercing eyes and a determined jaw. The wide forehead wears a frown and the cheeks are lined, but it is the leonine face of one who has looked ‘Life’ in the eye. Her daughters, though talented did not inherit her fiery grace and physical courage. They were both educated well and had an easier early life, but this is what Madhu, Gulab’s daughter has to say about her family:

In our society when a girl is born her parents rejoice because they see her as an earning member . . . her exploitation begins in her Maika . . . the male . . . does no work . . . younger brothers and sisters are all nourished on her earnings . . . there is no planning about her future . . . once the girl goes on stage nobody can stop the pattern from repeating itself . . . my sister and I got nothing . . . but Gulab Bai was different . . .

Yes, Gulab was different. And the source of her outrageous strength was not just a quick mind, charisma and her music. There were other theatre women who possessed those qualities and still remained timid and too fearful of men. The rare grit one sees in Gulab comes from her having escaped the deadly middle-class training that trapped her daughters and which most Indian homes and schools impart to girls to turn them into little ladies for the marriage market. Gulab saw nothing untoward in getting her brothers to throw a policeman asking her for bribes into a pond of water or telling a cheating partner to get lost. One feels that as she and her sister and daughters began to trim their sails to move around with educated middle-class men, her vulnerability grew. From a chaotic childhood to a painful early liaison to a huge financial burden, nothing was able to tame Gulab—until she felt the need to give her daughters middle-class husbands. Nonetheless, she retained her love for the dying art form which was her chosen vocation till the end, asking that it be sustained and supported.

A must read for all who wish to understand not just the art form that Nautanki was and Gulab’s great contribution to it, but also about a spunky dancing girl from the backwaters of Kanpur who lit up the skies with her talent for half a century.

Mrinal Pande, a writer and journalist, is currently Editor-in-Chief of Hindustan Dainik.