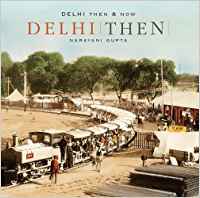 Delhi then and Now is a unique book. In two distinct parts, Narayani Gupta and Dilip Bobb have captured this ‘city in transit’ very graphically, recreating the richness of the nostalgic past juxtaposed with its vibrant presence.

In Part-I-Delhi Then-Narayani Gupta has given an account of the evolution of the city interspersed with some interesting tid bits. She starts with a statement that ‘Delhi’ is an attractive name because of its brevity. She mentions different other names by which the city has been known at different times like ‘Dehli’ or ‘Dilli’. No one is very sure where the name Delhi comes from. It is strange how Delhi has always attracted powerful invaders despite its harsh climate ranging between scorching summer, torrential rain and bitter cold. The history of Delhi is traceable to roughly 1000 BC based on the account in the Mahabharata of the founding of ‘Indraprastha’-the city of the Pandavas.

From 13th century onwards the face of Delhi was regularly changing with almost every new ruler shifting his capital to a new site, from Meh-rauli to Siri to Ferozabad and Shahjahanabad to Lutyen’s New Delhi.