Children of the Magic Pen 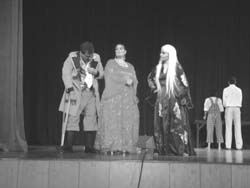 Today children are distracted. Distracted by video games, television, computers, you name it! Everything seems to be an enemy of reading. In the vivacious play, Children of the Magic Pen written by Nilima Sinha, Devika Rangachari, Girija Rani Asthana, and Nita Berry, our timeless childhood classics jump off the page to valiantly fight the dangers to books. What are the dangers our heroes face? The pit of oblivion, book eating termites morphing into destructive computer viruses, and also distractions like the stunning enchantress Rangeen Rani, or the silver screen. The jumble of characters set off on a treasure hunt until at last they reach Magic Castle where the greatest treasure known to man awaits them—immortality! They will live on and on, enchanting generations of young readers through books. It is a campaign that cries out, ‘Read India Read!’

This dizzying kaleidoscope of characters includes many of our childhood favourites. Aladdin, our strapping young lad who flew off his carpet from the Arabian Nights, R2D2- the lovable favourite of Star Wars, Mary Poppins—where elegance meets class as she graces the Earth with her magic umbrella, the pompous Queen of Hearts always ready to assert herself, Feluda the overly intellectual detective from India, the gregarious Captain Silver, the crocodile of the Panchatantra whose insatiable palate clamours for hearts, his foe the monkey who commits one blunder after another, the fearful white rabbit, enchanting Rangeen Rani, the devilish termite king, the wise old librarian and the radical reader, all make up the cast to this delightful comedy, ably directed by the eminent Feisal Alkazi.

I was very impressed by the performance. Mary Poppins had a charming Old World innocence about her. The Queen of Hearts well played out a contemptuous pompous character who would continually shout ‘Off with their head!’ as a continuing mantra. The White Rabbit occasionally popped up here and there, fearing the Queen of Hearts would behead him. The monkey kept its humble stance throughout, and fed humorous lines like “Seedhi baat no bakwas.”