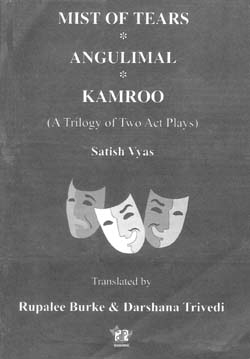 Contemporary regional drama in translation, one of the ‘not so exploited/explored sub-genres’ in literature(s) comes as a very easily enactable text for performance for theatre lovers who want to try something new with Rupalee Burke’s and Darshana Trivedi’s translation of the well known Gujarati playwright Satish Vyas’s Jal Ne Parde (Mist of Tears), Angulimal and Kamroo, a trilogy of two act plays. The ‘collaborative translation’ as Avadesh Kumar Singh terms it in the ‘Foreword’ does full justice to the original texts that were, in the translators’ own words ‘dragon in the gate’ ‘easy’ and ‘delightful to translate’ experiences. Simple, yet effective vocabulary and syntax that could easily be grasped in the first hand dialogue delivery of the personae (if in performance) and a translation that retains the regional essence without losing the opulence of the English language mark the trilogy thereby inviting readership/enactibility of the plays.

Amidst the web culture of ‘voicing through blogging’, where the ‘autobiographical online diary’ concept has gained a hype, the play ‘Mist of Tears’ comes in the nick of the time with its ‘auto/biographical’ element revisiting the literary past of regional literature. The theme of conversion and re-conversion, both into Christianity and Hinduism of Kant (pronounced as /ka:nt/), the well known poet of Gujarat find an appropriation in the present context of the religio-political turmoil that gobbles the individual psyche in the first, second or the third world nations. Parallel to the undercurrent of the poet’s discussion with the poetic intelligentsia of his times is the projection of the beautifully interwoven poetic love scenes of Kant with both the women in his life. If the original Gujarati monologue is a balance of lyrics, meter, consonance and assonance with long, figurative speeches, the translation nonetheless, emerges as an excellent counterpart to it.

Criminalization of politics in the form of corruption, vote logistics, opportunism and unethical nexus for power sharing mark the second play Angulimal. Vyas reconstructs the existing social myths using the local material to make his characters compulsively believable for a layman reader. Interestingly, a play with a strong political theme generally assumed to be monotonously slow and off beat takes a musically rhythmic form with choral recitations (often repetitions, too) of the ‘finger poems’, abusive phrases, chants from children’s games, religious refrains, names, labels or social tags for Angiram aka Angulimal, the prota/antagonist(?). Perhaps, these translations must have been a real challenge for the translators who, like their fellow beings, face the problems of translating culture specific terms. The reader would enjoy murmuring the lines/dialogues and be a part of the ‘at times, uniting and at other times, disuniting with the mob’. The only pinch is while the common man seeks a conventional ending with the feeling of ‘ultimately-the-truth-will-win’ scenario, the play ends on a note of pessimism with the coterie of politicians once again dividing the country in the name of caste, religion and language.